That’s not its name of course — it’s the Hummingbird Clearwing Moth, Hemaris thysbe.  We usually see this moth hovering over flowers (see previous post on this species) as it seeks out the nectar inside, but I had a rare opportunity to view the moth at rest the other day.  The view through the clear wings looked a lot like stained glass.

You can actually see the dark lower edge of the hindwing through the larger forewing which has a reddish-brown border.

These moths have been much more common in the backyard garden this summer, as have the butterflies and bees, but it’s unusual to see them sitting still instead of busily flitting about.

I found one of the culprits that can cause cucumber wilt on some milkweed plants in a backyard nearby yesterday — the very attractive orange and black Squash vine borer moth (Melittia cucurbitae).  It’s too bad they are such damaging pests in the garden because they are quite photogenic. 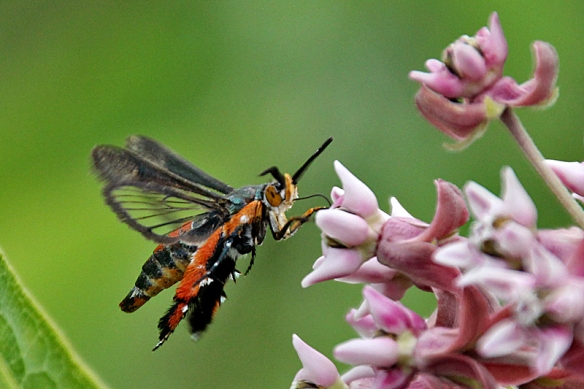 It looks like a wasp from a distance with its striped body and long dangling legs, but is actually a member of the clearwing moth family (Sesiidae).

Long, highly “feathered” back legs drag behind the body as the moth flies, making it look like the wasp that it is trying to imitate.  But the clear, moth-shaped wings give it away, although these are not really visible to the human eye because they are moving so fast, they almost disappear.

The wings are just a gray blur in this photo, and you can clearly see the long proboscis inserted into the nectary of the milkweed flower — a very un-wasp like head. It looks like those hind legs also have some sharp spikes on them, as well as their feathery covering of scales.

Many of the species in the Sesiidae family are active in the daytime and are brightly colored, yellow and black or orange and black, mimicking bee or hornet coloration. This Batesian mimicry (in which a palatable species mimics an unpalatable or predatory one) presumably reduces their chances of being eaten by predators while foraging on flowers in the daylight.

At rest, the mimicry is closer to the real model, since its folded wings do resemble the shape of a wasp’s.  (This is probably the culprit whose larvae wilted my cucumber vines last year — feeding on the swamp milkweed flowers in my backyard.  You can read more about that here.)

Other members of the Sesiidae family are also agricultural pests, infesting fruit tree, vegetable, and timber crops, as their larvae bore into the woody stems or trunk and decimate the interior vasculature system of the plant.

The Clearwing Hummingbird Moth (Hemaris thysbe) is no relation to the garden villain above.  It’s a member of the Sphingidae family of hawkmoths, and although the larvae do feed on honeysuckle vines and some fruit trees, they don’t do nearly the damage that the Sesiidae species do.

This photo is from a recent post on critters of the northern bogs and forests, but the Clearwing Hummingbird Moth can be found almost everywhere in North America from Alaska to Florida.   Hawkmoths have a stouter, less slender body, shorter legs, and no scales on their legs, compared to the Squash vine borer moths.

I’m not sure what the significance of clear wings is in these very different clearwing moth species.  Perhaps lack of scales on the wings means less air resistance during hovering flight, which both types of moths use for nectar foraging; or perhaps clear wings enhance their mimicry; or perhaps clear wings just present a smaller target to potential predators, since they appear almost transparent while the moth is flying.  Whatever the reason, the convergence of species from two different moth families is an interesting one.