Last year’s big Christmas present was a new macro lens, which I didn’t get around to using until spring, because frankly it was too cold to try macrophotography outdoors last winter.  Apparently, I didn’t use it very much even then, because it was much easier to select the top ten “small things” photos than it was for the birds. But here they are — the top 10 macro shots of 2014, chosen for their color, variety, and potential biological interest.

An Orange Bluet male on a smooth, contrasting background of green.  I never saw one like this again, after I took this photo. 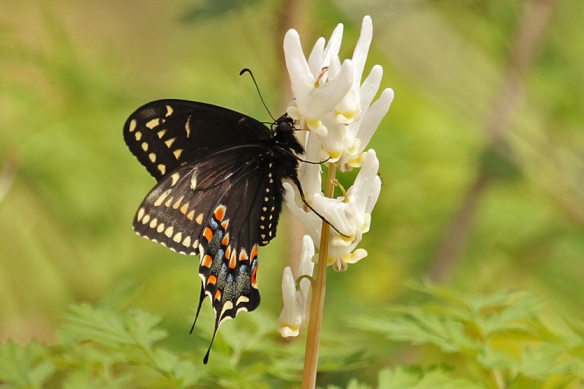 The contrast of black in the Black Swallowtail on the white of the Dutchman’s Breeches was the basis for this choice.  Finding nectar in early spring can be a challenge for early emerging butterflies. 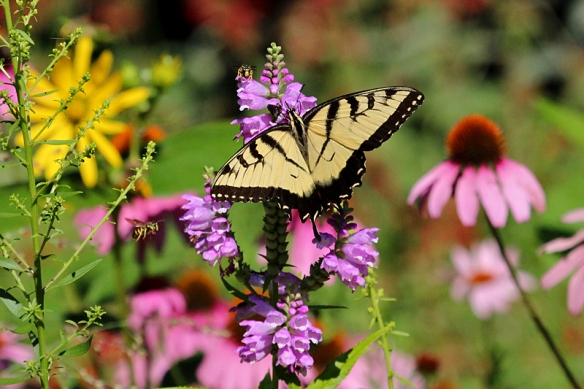 In contrast to the shot above, the Tiger Swallowtail in a sea of summer wildflowers had numerous choices from a variety in the wildflower garden.

It’s difficult to choose such a noxious pest insect like the Squash Borer Moth for this collection, but it is a colorful insect caught in mid-flight (in focus!)

One of several species of meadowhawks difficult to tell apart in their juvenile stages. They were very abundant in the wildflower garden this summer, hopefully gobbling up the many mosquitoes there.

I never realized what a popular flower Spiderwort is to insects. The Green Sweatbees, hoverflies, and bumblebees stocked up on its pollen in early spring. 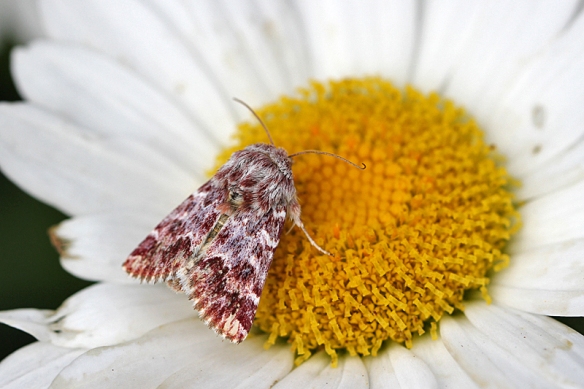 Another rare visitor to the back yard (well, really a neighbor’s front yard) was this Leadplant Flower Moth, a specialist on said plant.  Read more about it here.

If you have ever been bitten by a 2-inch horsefly, here’s why it hurt. Those are a couple of shearing scissors up front in its mouthparts.

And lastly, the colorful Milkweed leaf beetles attempting to mate on a milkweed leaf. It’s more of a humorous shot really, since this male tried every which way to get into position.

That’s not its name of course — it’s the Hummingbird Clearwing Moth, Hemaris thysbe.  We usually see this moth hovering over flowers (see previous post on this species) as it seeks out the nectar inside, but I had a rare opportunity to view the moth at rest the other day.  The view through the clear wings looked a lot like stained glass. 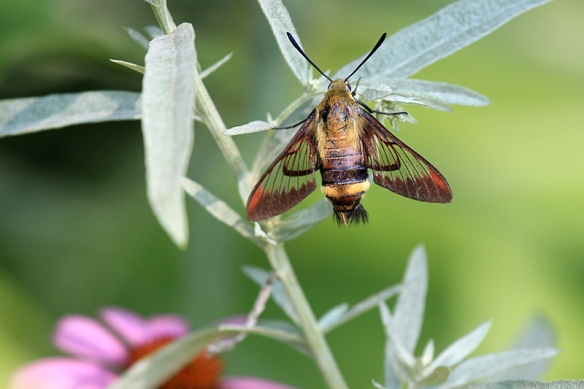 You can actually see the dark lower edge of the hindwing through the larger forewing which has a reddish-brown border.

These moths have been much more common in the backyard garden this summer, as have the butterflies and bees, but it’s unusual to see them sitting still instead of busily flitting about.

What a great diversity of habitats we encountered on our extended field trip to the northern reaches of Minnesota this past weekend.  One of the first stops just north of Virginia, MN, was the Laurentian Divide, which I had never heard of.  This modest rise of granite divides two watersheds:  north of the divide rivers empty into Hudson Bay and the Arctic Ocean, while south of the divide, rivers drain into the Atlantic, either via the Mississippi River or the Great Lakes and St. Lawrence River. 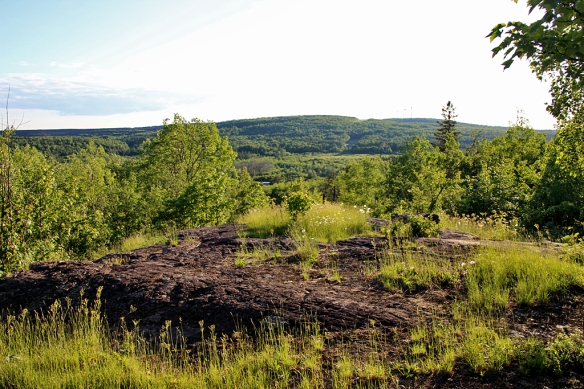 I am standing on the Laurentian Divide that runs through the middle of North Dakota, northeastern MN, and most of southeastern Canada.  This exposed granite was scoured clean of vegetation by past glaciation, and today is covered by thin soil and sparse vegetation.

The granite of the Laurentian Divide is part of a huge formation called the Canadian Shield that comprises the ancient core of the North American plate and today underlies most of Canada and part of the northeastern U.S.  The exposed rock was formed approximately 2.7 billion years ago! during a series of volcanic events that resulted in upheaval of a vast area of rock that may have reached 39,000 feet elevation (12,000 m), but is largely eroded to modest hills today.

This boreal forest area of Minnesota is a composite of granite knobs, forested slopes, and boggy lowlands, each with their unique fauna and flora.  In places where the land flattens out over river flood plains, there are expansive grassland hayfields, suitable only for grazing it seems. 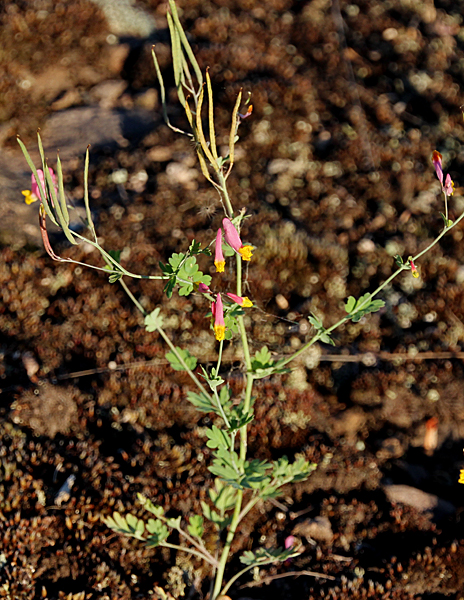 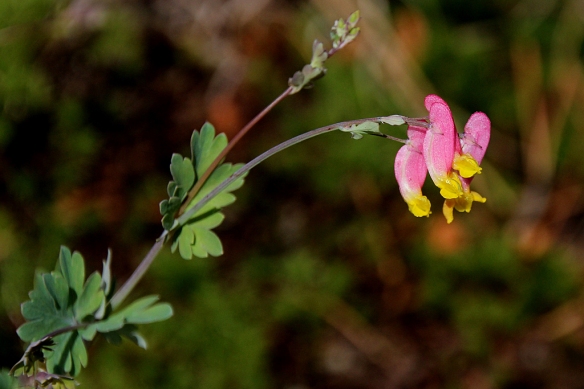 The flower reminds me a little of bleeding heart, but it is not in the same family.

A mixed deciduous-coniferous forest typical of northeastern Minnesota. Birch, apen, maple, and basswood are interspersed with red and white pines, and a dense fern understory.

Ground Pine (not a miniature pine but a Lycopodium species) was common in some places. The spores of the brown spikes at the top of the plant are harvested for a variety of uses, one of which is the flash powder used by magicians. 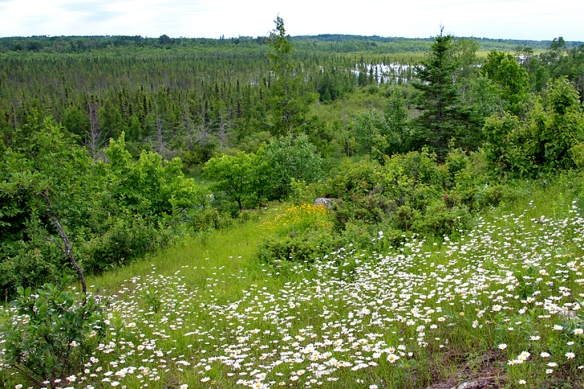 In the low areas at the base of the hills, black spruce and tamarack are the dominant species found in the bogs.  Oxeye Daisys were one of the most common colonists of bare areas on granitic slopes.

Gray Jays replace Blue Jays in the mixed forest.  They are smaller and much quieter than their jay cousins, but just as curious.  They are resident year-round here, managing to eke out an existence and even raise their chicks during mid-winter when temperatures are coldest.  They store food in the summer in sticky balls plastered to the vegetation for later consumption, and may eat anything from fruits and insects to small animals. 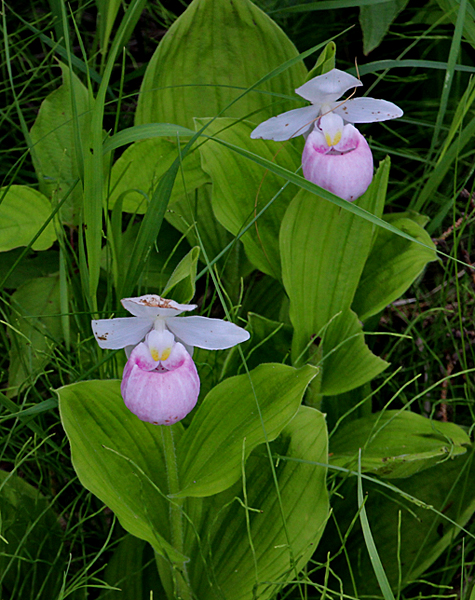 Lots of Showy Lady’s Slipper orchids were blooming in the understory, along roadsides, and even in open, wetter areas.

A hummingbird clearwing moth sipped nectar at the honeysuckle flowers.  Swallowtail and Pearl Crescent butterflies also visited this plant along with the moth.  I saw many more butterflies in the northern mixed forest than I have seen in my own garden.

Water percolates through this boggy landscape in channels. You would get really wet feet trying to walk through this area, which is why fur trappers moved their cargo primarily during the winter across the snow instead.

There is much to see in this northern boreal forest, but hikes are not really a pleasant experience right now with all the mosquitoes and flies that attack bare skin.  Maybe that’s why the warblers like it here — lots of flies to eat.