The porch thermometer read -10 F (-23 C) and there was bright sun in the backyard, but there were no birds and no squirrels present at or under the feeders.  Finally about 10 a.m., the first foragers appeared.  The thermometer had worked its way up to just under 0 degrees F (-18 C), but the wind was blowing, so windchill temps would be well below 0 F.

Mr. Cardinal monitored the surroundings while Mrs. Cardinal foraged at the bird feeder. 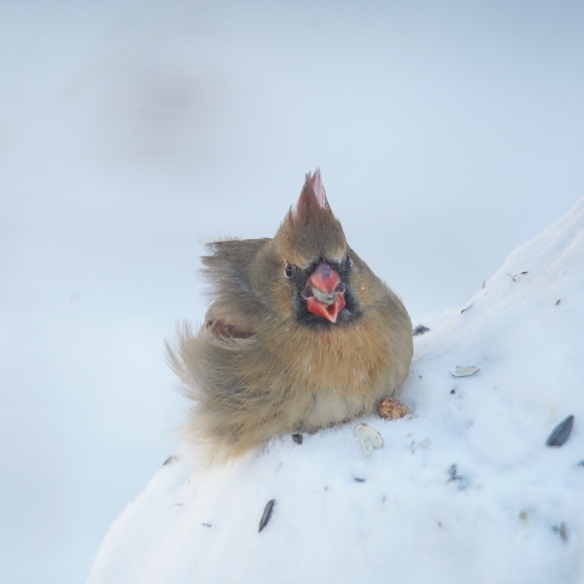 She is finding the discarded sunflower seeds left by the chickadees and nuthatches who pitch them out of the feeder in search of peanuts instead.  The wind is fluffing out her feathers, but also carrying away her body heat. 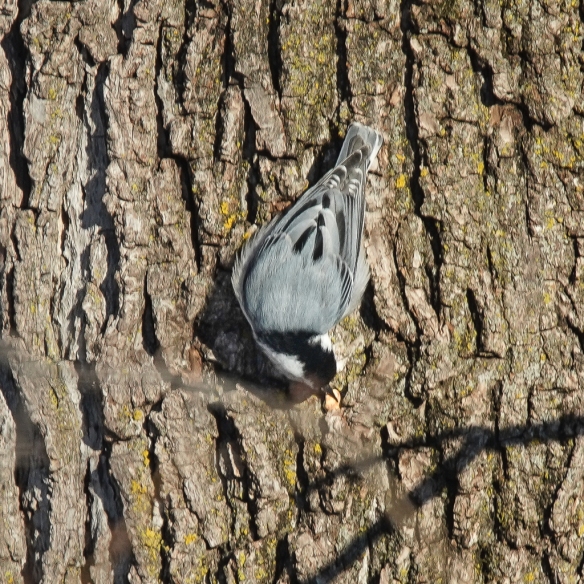 This White-breasted Nuthatch is stashing a peanut in a bark crevice, where it will hammer at it until it breaks off pieces it can eat.  I wonder if the crevices are more apparent when they are upside down, or it’s easier to break them up when they come at it upside down????

After much hammering away, the Nuthatch has reduced the peanut (directly under its beak) to just a small chunk.

You know it’s cold when you see a Nuthatch pause for several minutes in its foraging efforts to bask in the sunlight. The bird’s back was directly facing the morning sun.

Peanuts are the preferred high-energy foods on subzero days.

The Goldfinch watched the Chickadee eating a peanut but made no attempt to go find some food for itself at the feeder.

Two birds exhibiting contrasting strategies for surviving harsh winters in the northern temperate climates:  Goldfinches turn up their metabolic furnace to keep their body temperatures stable on extremely cold winter nights; they do this by harvesting fat-rich seeds (like sunflower seeds) and keeping their fat reserves high.  Chickadees are primarily insectivores that do eat seeds in the winter, but typically conserve their internal fuel resources by lowering their body temperatures at night — just in case they need it to find food the next day.

The heartiest of little winter birds…Chickadees are survivors!

By noon, the wind had picked up, and the temperature had dropped again, on its way down to an overnight low of -27 F (-32 C), and I didn’t see birds at the feeder for the rest of the afternoon.  I hope they survived overnight!

The trunk and top branches of the Buckeye tree outside my (somewhat dirty) porch windows are brightly illuminated with the morning sun, making it the perfect place to bask in whatever heat the sunlight can provide on this chilly morning.

Early in the morning, I’ve noticed a variety of birds and squirrels using the buckeye as a basking spot.

You don’t normally see White-breasted Nuthatches at rest in this posture (head up). Notice how the bird is plastered right up next to the trunk of the tree with its feathers maximally fluffed. Is it possible that the tree surface is actually “warm”? (well, probably warmer than the air…)

Red-bellied Woodpeckers apparently like the buckeye as a basking spot as well.  This bird was sitting at rest, not foraging in this spot. 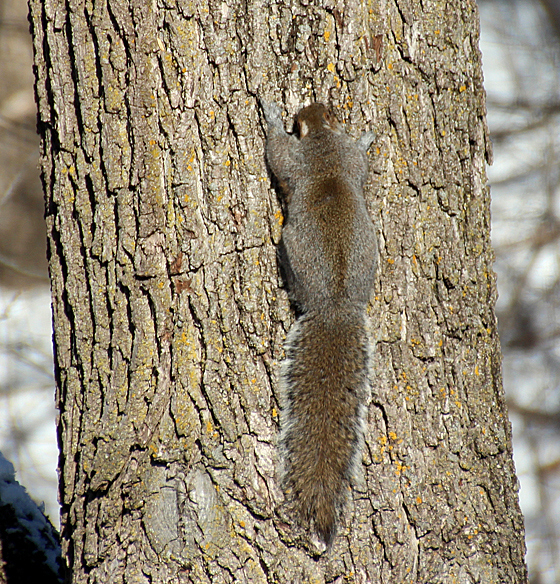 Usually we associate basking behavior with reptilian thermoregulation — sun-loving turtles and lizards, for example.  Even crocodilians lie around in the sun letting its heat warm them while they digest their latest meal.  But basking becomes important to birds and mammals as a means of economizing on the high metabolic expense of staying warm in extreme cold. 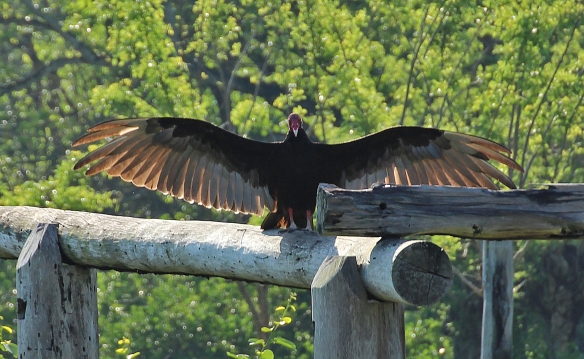 Here’s a bird that specializes in basking to warm up on cool mornings.

Frosty the Snowman would be delighted to live in Minnesota this winter, where 20 F (-7C) is a warm (and rare) day.  Schools were closed one day this past week and will probably close some of next week, not because of snow but because of excessive wind chill in the -30 to -40F range.

The birds seem mostly unbothered by all the cold weather we humans fuss about, but I imagine they too are suffering some of the effects of the wind, as it disturbs the carefully fluffed feathers and carries away their expensively produced body heat.

No matter which way the bird faces, the wind still ruffles some of his feathers. Sitting out in the open results in too much heat loss on this chilly day at 4 F (-20 C). 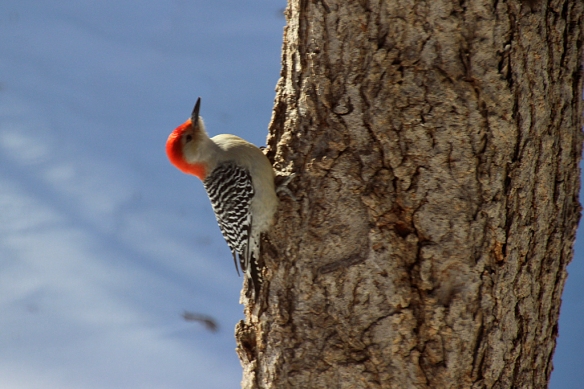 It’s actually a little warmer sitting in the sun letting the tree trunk block the wind.  Even the gray squirrels like to bask on this side of the buckeye tree for a few minutes.