As in blue sky (for a change) and Bluebirds (that shouldn’t be here at this time of year) on a sunny day with an unseasonably high temperature hovering near freezing (30 F). For a change of pace I went walking on the local golf course, curious to see whether I could find the reputed Mountain Bluebird that has taken up residence here along with aforementioned Eastern Bluebirds.

But I found only the eastern cousins, near two Bluebird boxes, which the birds were sitting on and inside of during the middle of the day.

Although Eastern Bluebirds breed here in the summer, they usually retreat south in the winter to places that have less snow cover and milder temperatures where they feed on a wide variety of shrub and tree berries and mealworms provided by friendly birdwatchers. What a treat to see their cheerful bright blue and rusty brown colors on a landscape that is mostly white, gray, and brown this time of year.

On a recent sunny day, a flock of Eastern Bluebirds chased each other in and out of what I presume were roosting holes in a dead tree. At times they behaved like woodpeckers, scaling the snag vertically, but there were obviously no hidden insects in a snag this old and rotten.  When they tired of this game, they settled down to some intensive foraging, searching the vegetation for the flies and bees that were pollinating the flowers. 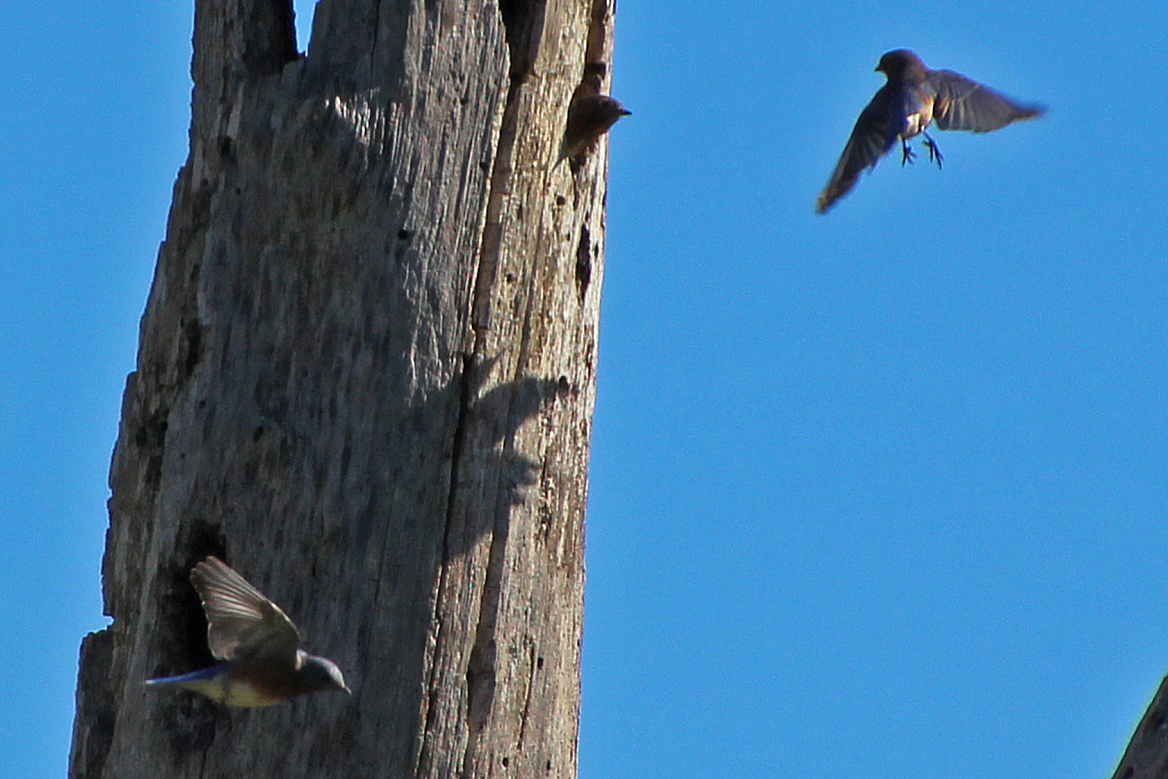 Yellow-rumped Warblers (left) seemed to follow the Bluebirds around as they chased insects from high or low perches.  Maybe the warblers caught the insects the Bluebirds missed.

They probed into every nook and cranny looking for hidden prey.  This bird stared at the mushroom on the rotten log for some time, before deciding it had nothing to offer.

When I stood quietly (for many minutes), Bluebirds would come within 15-20 feet and pose for my camera. 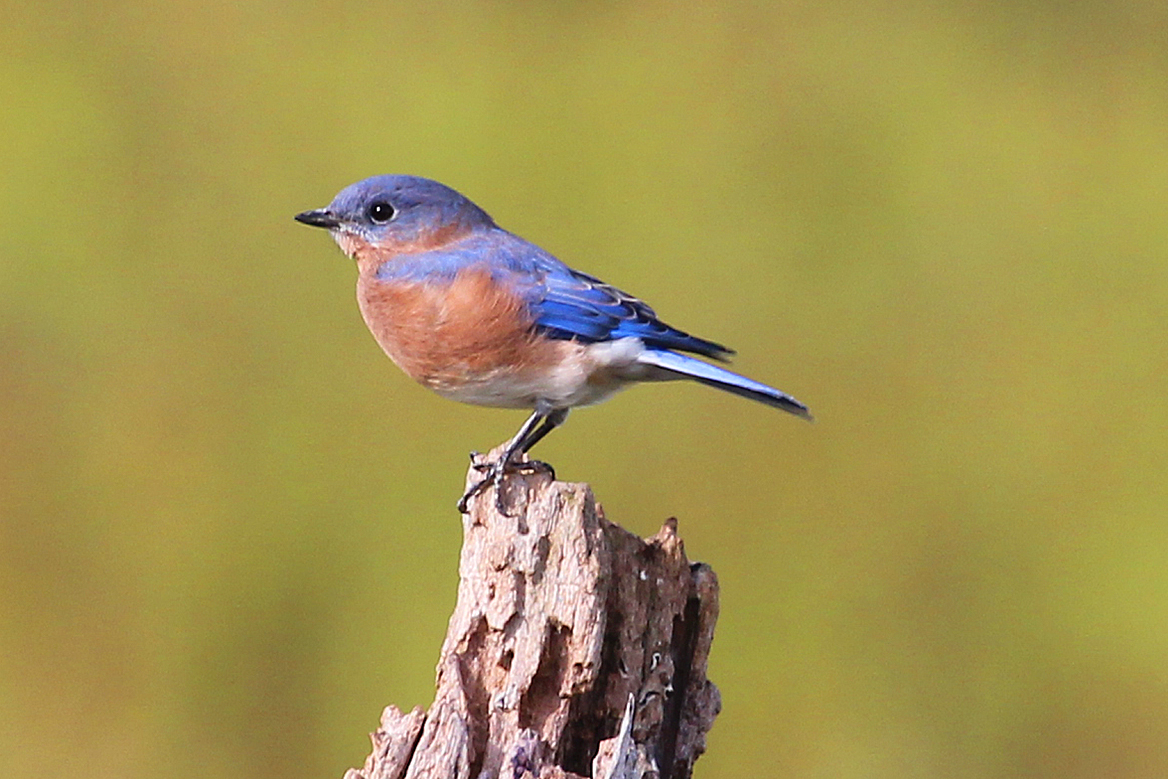 A mottled background of drying prairie grasses was the perfect contrast for this bird’s bright blue and russet colors.  I’ll miss these cheerful little birds when they fly south.

The Great Plains states are a meeting ground of eastern and western-occurring bird species. Breeding activity was in full swing in the South Dakota Black Hills this past week, with birds dashing around, fighting, singing, and completely uncooperative as far as photography was concerned.

Bullocks Oriole are the western counterpart of the eastern Baltimore Oriole, but look quite different, with their black eyestripe (instead of an all black head).

The white on the wing is more of a large patch than a wing bar (as it is in the Baltimore Oriole.

The Baltimore Oriole occurs in South Dakota, but doesn’t seem to breed in the Black Hills, which is the eastern limit of breeding range for Bullock’s Oriole.

These two species do occasionally overlap in breeding areas and can make mistakes and pair with the wrong species, which is why ornithologists once lumped them as one species, the Northern Oriole.  However, DNA comparisons of the two species show that they don’t even share a recent common ancestor.

Western Kingbirds are similar in size and habits (flycatching from a perch) to their eastern counterparts, the Eastern Kingbirds.

Both eastern and western kingbirds hunt for insects in the open prairie, but nest in the protection of shrubs and trees.

With completely overlapping ranges and similar foraging strategies throughout the Dakota prairie, Western and Eastern Kingbirds would seem to be in direct competition with one another, but apparently avoid it with minor differences in their specific habitat preferences for nesting and hunting.  Western Kingbirds were very common in towns, parks, and camping areas where there were very large, widely dispersed cottonwood trees, which they prefer for nesting.  Eastern Kingbirds were only seen in lower vegetation (shrubs) near the prairie edge.

We saw Mountain Bluebirds as we were driving along in the Black Hills, but not close enough to photograph. 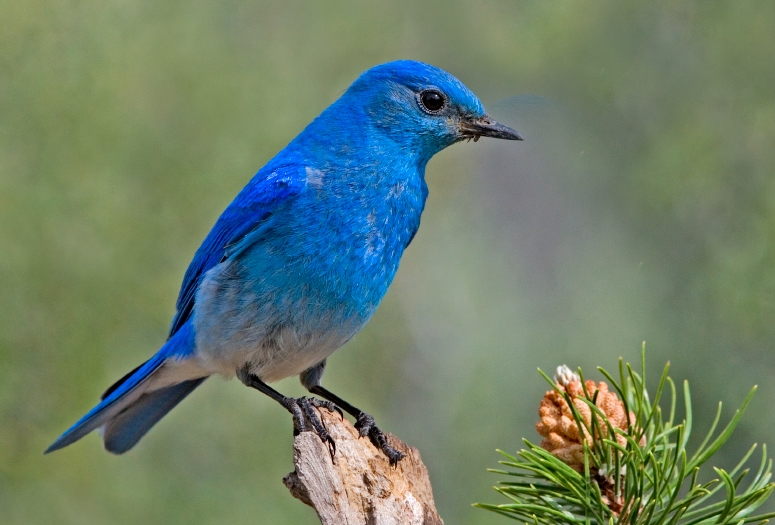 South Dakota, with its varied landscapes — desert, mountain, and prairie — is a great place for birding!

This has to be one of the most endearing little birds we see in Minnesota.

I found them this year in exactly the same place (same trees) I first saw them last year, and within a week of the same time of year.

Some were hunting for berries in the bushes.  Some were hawking for insects from a perch. Their little social group flitted around me and over me, chirping away like they were gossiping about me pointing some big old black tube of a lens at them.

Eastern Bluebirds are definitely one of my favorite photo subjects.  Like their larger cousins, the Robins, Bluebirds eat a mixed diet of insects and fruit in the winter.  Availability of food determines whether Bluebirds stay in an area year-round, and Minnesota doesn’t offer much in the way of insects during the winter.  Further south Bluebirds might feast on berries of dogwood, sumac, hawthorn, virginia creeper, and wild grape, even blackberries, poke berries, or honeysuckle to supplement their insect diet.

I have Bluebird boxes in my backyard (which the House Wrens love), but have never seen a Bluebird there.  Maybe I need to plant some of these fruit-bearing bushes and trees.

Minnesota days don’t get much better than this one.  Bright sun, mid 70s temperature, and no bugs (meaning the mosquitos aren’t thick yet).  Daughter Alison told me she saw lots of wildflowers at Elm Creek Reserve Park yesterday.  I drove up there today and took my bike along just in case the wildflowers were far from where I would park.  What a good idea.  In fact, I highly recomment this scenic prairie and wooded bike trail that winds through the park in an approximate 10 mile loop.  Look here for a map.

There were indeed some very nice wildflowers in the park, scattered among the restored prairie, the woodland understory, and the open brome fields.  Here are some photos of a few of them.

In the restored prairie area I found a really well nourished Puccoon species, with multiple stems and flowers, and a variety of pollinators all over it, like this Clear-winged Moth.  Unfortunately the moth was moving so quickly from flower to flower that I never had a chance to focus accurately. 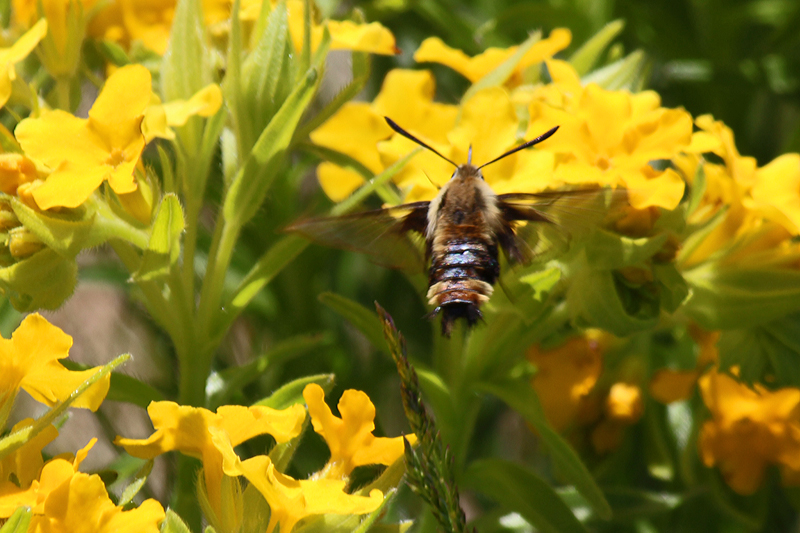 Also in the restored prairie was a large clump of lupine, at about peak flower production.  Their vivid blue-purple flowers contrasted sharply with the dead grass stems from the previous growing season. 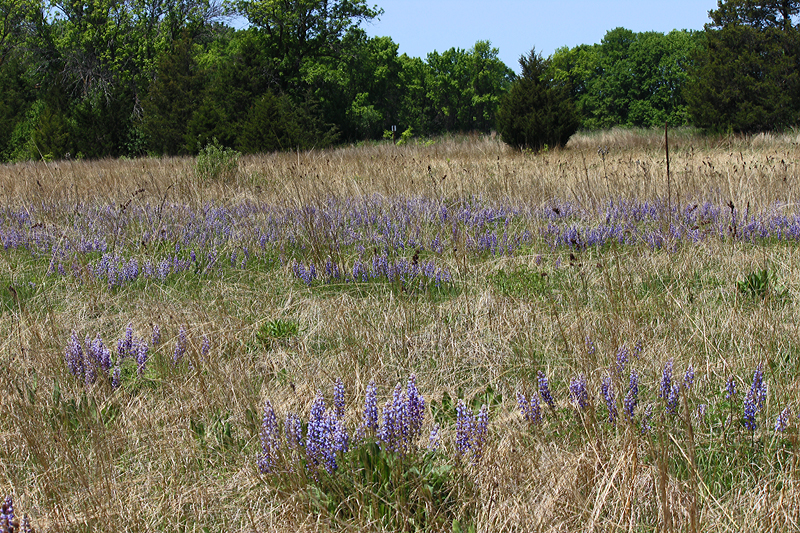 Golden Alexander was abundant in the restored prairie but also on the edges of the brome fields, and it much larger with many more flower heads than I have seen in other prairies.

It too, was host to a number of pollinators, like this Juniper Hairstreak.  These 1/2 inch butterflies are supposed to hang out in Red Cedar (an evergreen that invades the prairies), but they were quite attracted to the yellow flowers out in the prairie today.

Elderberry and Red Osier Dogwood were also abundant in the brome fields, along with a lot of Staghorn Sumac.  I don’t know if people in the midwest use elderberry for anything, but in California we made wine from the berries in late summer one year.

The elderberry was loaded with flowers, on one clump of which was a pretty blue 1/2 inch long butterfly.  I looked up its name:  Eastern Tailed-Blue, which is distinguished from all the other blue butterflies by the orange dots on its blue tails (hind wing).  I didn’t get close enough before it flew away to show the orange dots, but I can see them there when I zoom into the photo.  The male is bright blue, the female is dull charcoal gray, but with the same orange spots on her hindwing.

In the woodland in the dappled shade of the large trees there, I found phlox, Virginia Waterleaf, and Wild Geranium.

Depending on the light conditions, the blue phlox can look a little pink.

And there is a white variety as well.

Wild Geranium looks nothing like its horticultural namesake, and lacks the geranium odor as well. 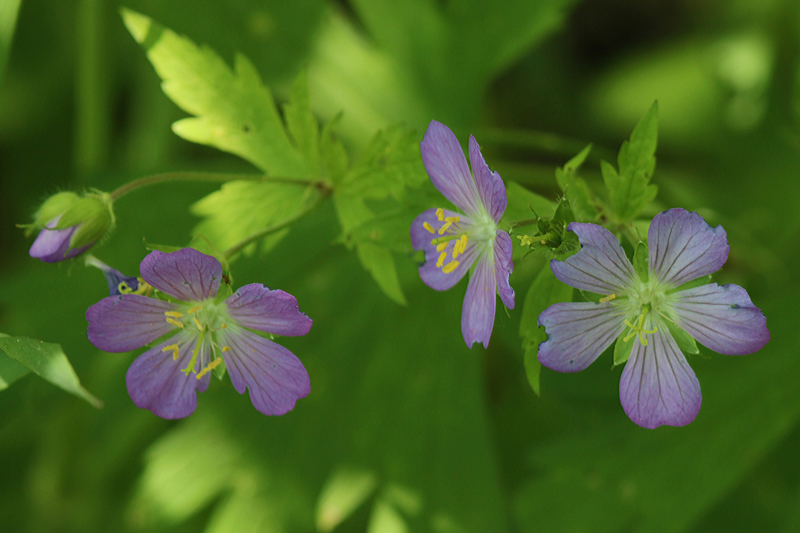 Elm Creek Reserve has dozens of bluebird boxes scattered throughout the acreage.  I checked them as I rode by but didn’t see a single bluebird on or flying from the boxes until I was almost back to my car.  And there was a pair perched in a tree about 100 feet from their nest.

The male has a brighter rust red breast and bluer head and back than the female (which you can sort of see in these too-far-away-photos. 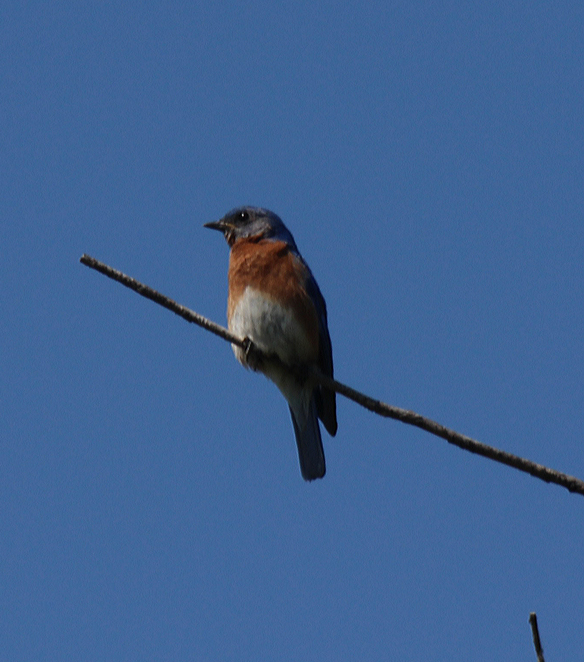