There are not one, but two mammalian predators looking for the squirrels in my backyard. One of the red foxes stopped by the other day, furtively sneaking along the fence line between backyards, pausing under some evergreens for a look at the bird feeders, and then hiding next to a shed in my neighbor’s yard.

But the next day, a coyote lingered in the backyard, hunting along the edge between the grass and the forest for unsuspecting squirrels.

What do you do on a gloomy, cold, drizzly day when you need to get out of the house and you’re not sure you’ll be able to find any wildlife to photograph  — why, go to the zoo and see what’s happening there.

Needing a challenge to photograph animals that are usually much closer than the ones I see outdoors, I decided to focus on faces and see if I could capture some characteristic animal expressions.  This really was a challenge because the lighting inside the zoo was even darker than that outside, and the animals rarely sit still for portraits.  Result — grainy images, but hopefully a few good portraits among them. 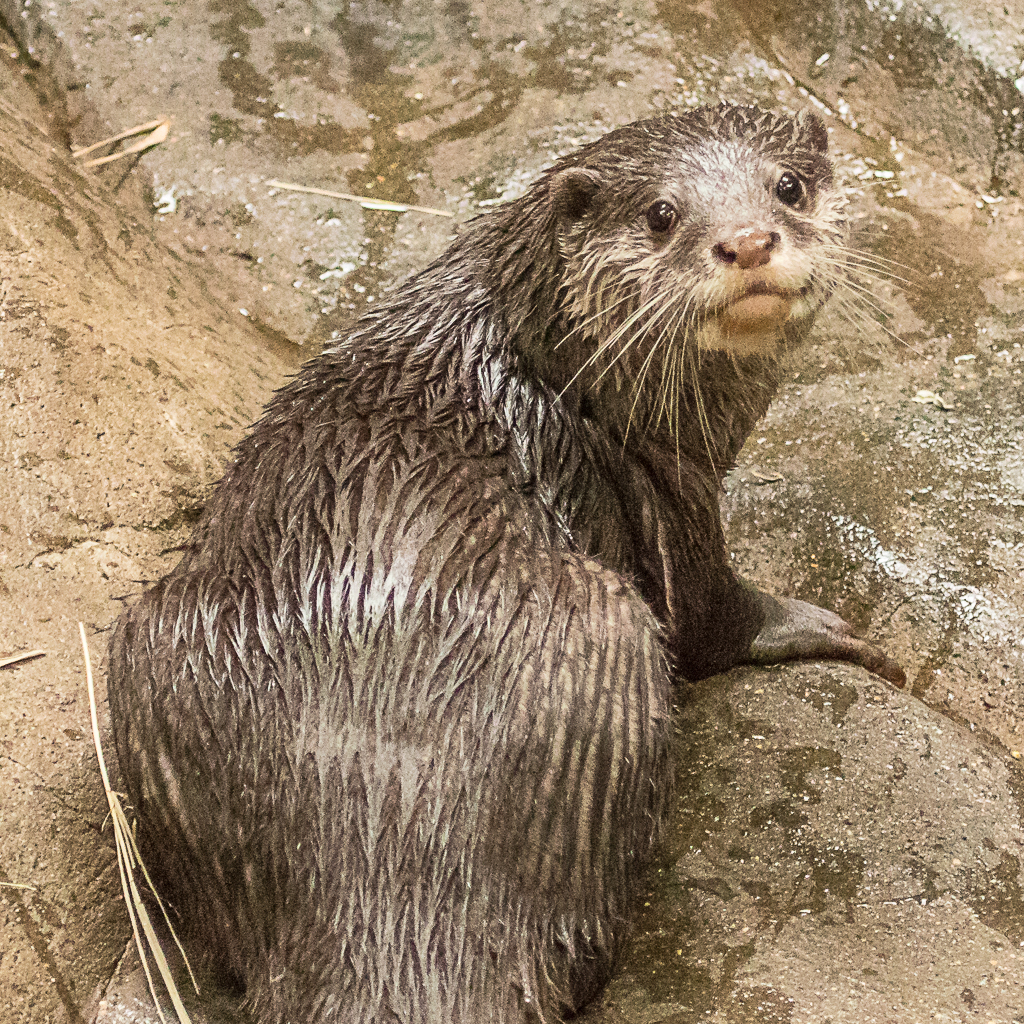 Asian small-clawed otters are the smallest of the otter species.

A small family group of otters was very active in the early morning just as the zoo opened, but being the only person around, they were somewhat interested in me (or my lens) because they kept looking back to check whether I had anything to offer them.  Like many of the captive animals at the MN Zoo, this is an endangered species, threatened by habitat destruction and pollution in its native Asia Pacific island habitat.

The Malayan Tapir calf was born this July, after a 13 month gestation period!  I was too close to the tapirs with my long telephoto lens, and it was a challenge to get both mom and offspring in the same shot.

Interestingly, Tapirs evolved originally in North America, along with their odd-toed (that is odd number of toes, not strange-looking toes) horse relatives.  They spread to South America and Eurasia and southern Asia, where tapir species can still be found, but the Malayan Tapir is one of the most endangered animals in Southeast Asia due to loss of their forest habitat.  According to Zoo literature, there are fewer Malayan tapirs than tigers in the wild.

Another resident of Southeast Asia — the White-cheeked Gibbon — is also threatened by logging, and by poaching young animals for the wildlife trade. Their name is appropriate to describe the all black male with his distinctive white cheeks; females are buff colored, although they too are dark-furred before they mature sexually.

Gibbons put on an amazing vocal display early in the morning, loud enough to make me want a pair of earplugs.  This early morning duet by the mated pair is usually associated with a territorial claim on a feeding area.  You can hear a good example of the contribution by male (high-pitched hooting) and female (reverberating yells) in the video below (female yells start at about 1:00 min in the video).

Leaving the Tropics Trail, I was among the first to walk through the Minnesota Trail, where the big carnivores were still actively chowing down on breakfast delicacies. 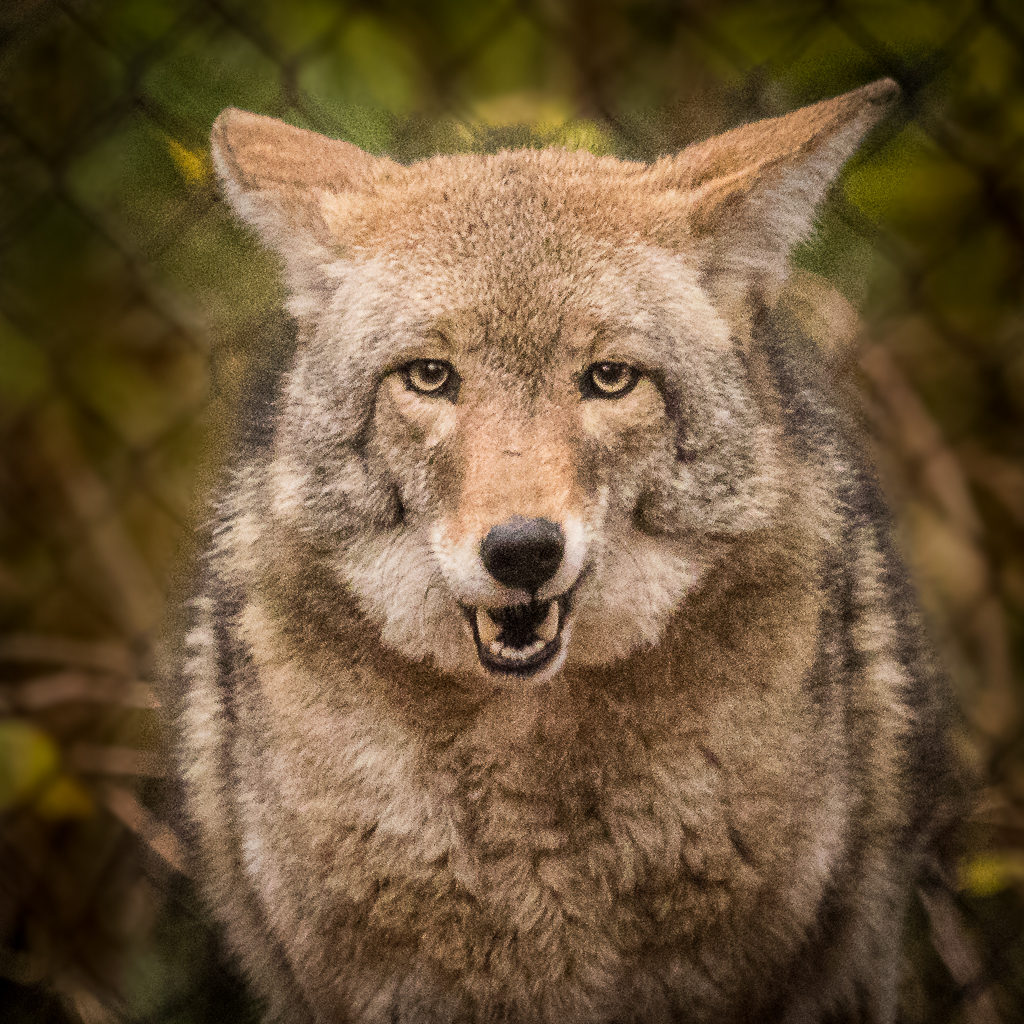 A coyote looked up at me, in between bites. 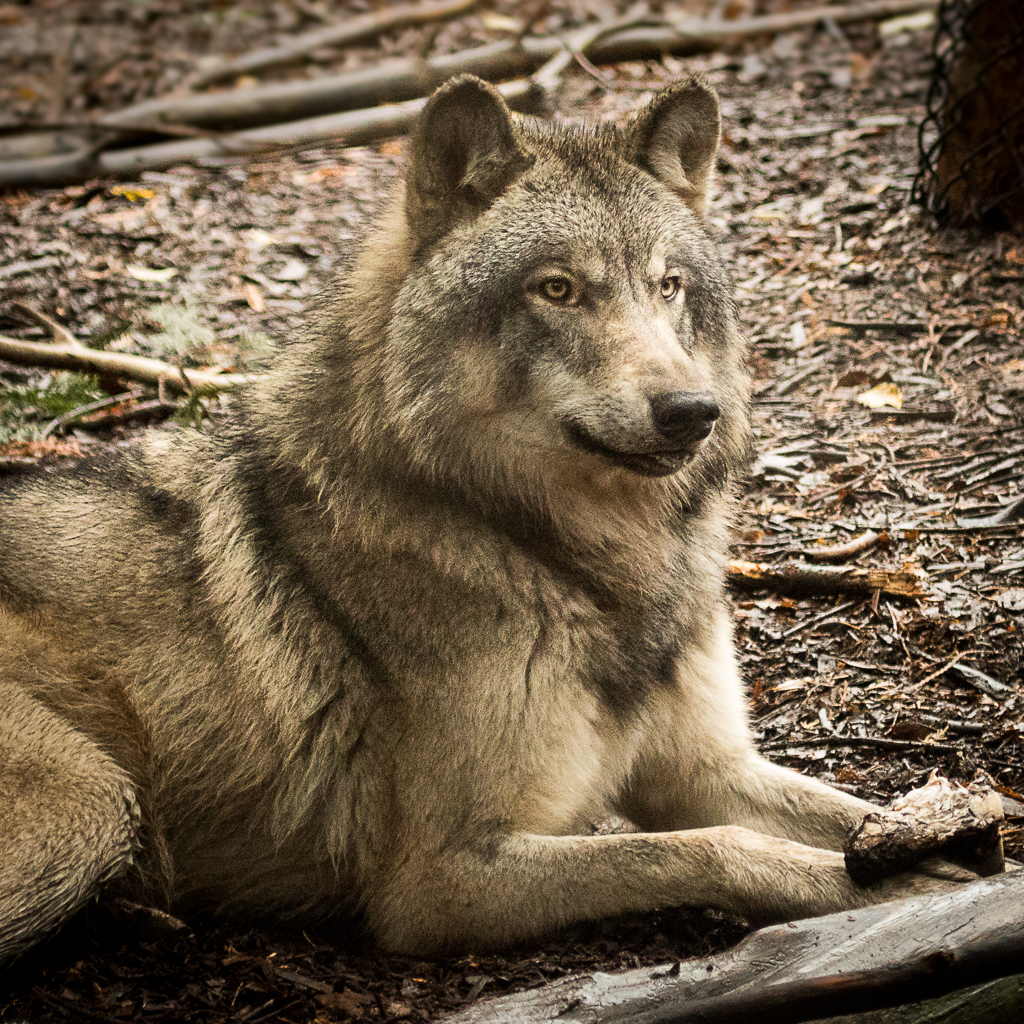 One of a pack of 5 Timber Wolves housed next door to the coyotes, Even though they had their own meat scraps to feast on, they were all fixated on staring at the coyotes next door. Probably not because they had better food, but because wolves don’t tolerate coyotes and will kill them if they can.

This “pack” of wolves was brought to the zoo about two years ago as 6 month old pups.  They had been rescued from a forest fire in Alaska.  Being the young, healthy animals they are, they put on quite a show of run and chase, dashing at full speed all around their large pen for several minutes.

Mama Lynx had four kittens with her the last time I visited the zoo. Today there were only two with her — the others may have been sent to other zoos.

Tomorrow — bird faces at the zoo.

The weather at this time of year, with its gray overcast and monotonous gray, brown, and white color scheme, is perfect for hiding wildlife in plain sight — at least from my eyes.  Animals that would stand out against a green summer background disappear into the landscape, and I’ll use that as an excuse for why my posts have been so infrequent of late. A few examples:

There is an owl shown roosting in the middle of this photo — but it might go completely unnoticed by the casual passerby.

With the telephoto, you can see this Barred Owl much better.  Its mottled plumage on wings and back and stripes on its breast helps it blend into the background until you get right up close to it.  An example of disruptive camouflage that is so effective in hiding in plain sight.

A female Ruffed Grouse foraging along the roadside in the spring is highly obvious.

A male Ruffed Grouse drumming to attract attention in the fall stays hidden (left center) in the fall leaf litter and twigs. Photo by Laura.

Standing like statues when they hear or see you coming, the gray-brown winter fur of White-tailed deer camouflages them well in the woods.  Unless they wave their white flag tails at me, I might never notice they were there.

Even in the summer and fall, deer can remain hidden in plain sight in tall prairie grass. I copied the image on the left into the original photo to illustrate how well the rusty brown summer fur coat blends into the background.

It isn’t just the prey species that utilize camouflage effectively — predators do too. 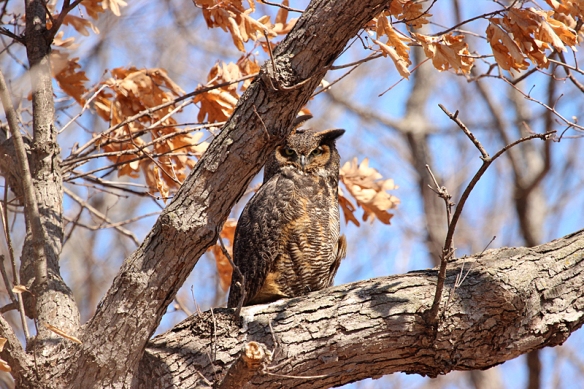 Sitting close to the branches of an oak, Great Horned Owl plumage blends in not only with the bark but the color of the fall leaves as well.  Sitting quietly, they might hope to avoid the harassment from a wandering pack of crows.

The little owlet, however, is vulnerable to predation and its plumage matches the branches it sits on extremely well.

The mottled coloration of Coyote fur stands out against snow, but blends in well when the animal is stalking prey through the yellow-brown vegetation in the winter. 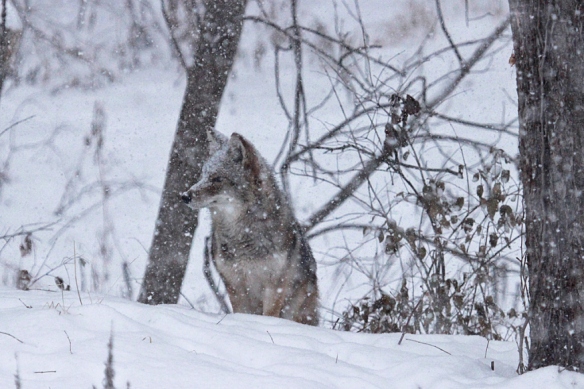 Letting that snow accumulate on top of its dense fur, however, is a great way to hide in plain sight during the winter.

If camouflage is such a great way to remain hidden, then how do some animals get away with flagrantly advertising their presence?  But that’s the subject of a different post.

I just missed the drama by seconds.  The lone wandering coyote that occasionally visits the backyard had just chased a squirrel up a tree, when I spotted him wandering over to the neighbor’s yard.  Since I missed the action, I’m not sure how this squirrel got injured, but it has sustained severe damage to its left front leg.

The squirrel waited until the coyote had left to come back down the tree and resume his foraging. It looks like his left foot is broken, some fur is missing from the upper part of the limb and the tail is a bit frayed at its tip. He was lucky to escape, but might not be very nimble at this point.

Coyotes subsist on scavenging from deer carcasses as well as hunting rabbits and mice in the winter. Squirrels make up little of their winter prey, so it’s possible that the squirrel’s injury is the result of an encounter with another predator.  Perhaps the coyote noticed that this squirrel was injured and thought it would be an easy meal.

In the neighbor’s back yard, the coyote paused to listen for voles (meadow mice) moving about in the ground below the snow…

There’s definitely something interesting there, but the snow has frozen into solid ice blocks and is too hard to excavate. 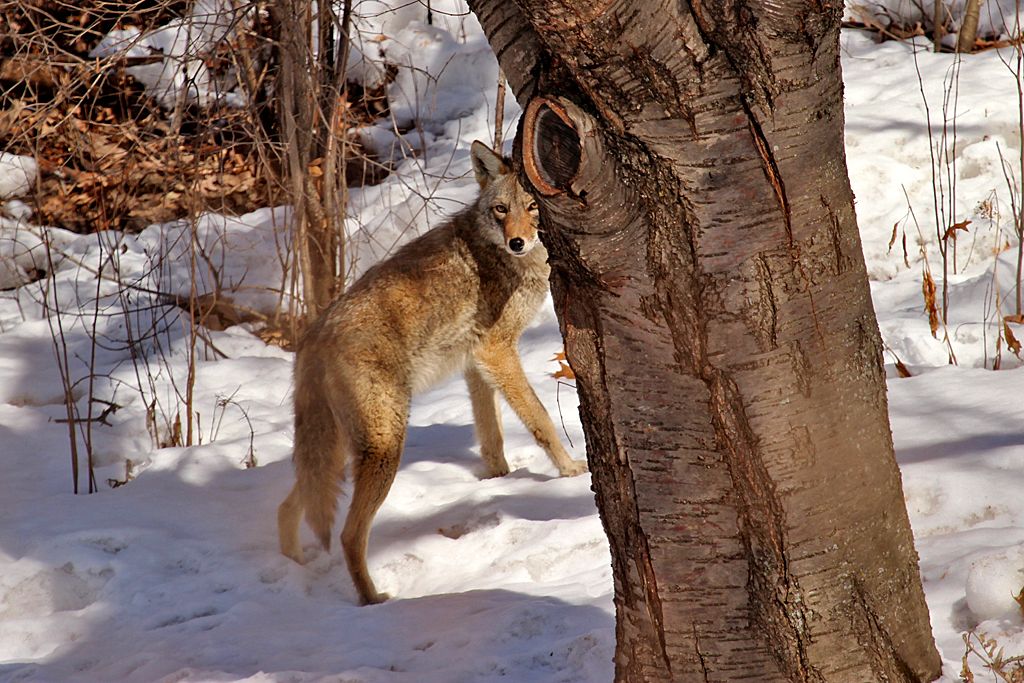 This hunt was a bust, so the coyote moves on.  Looking back at what might have been a substantial meal.

The scene… the backyard as it began to snow 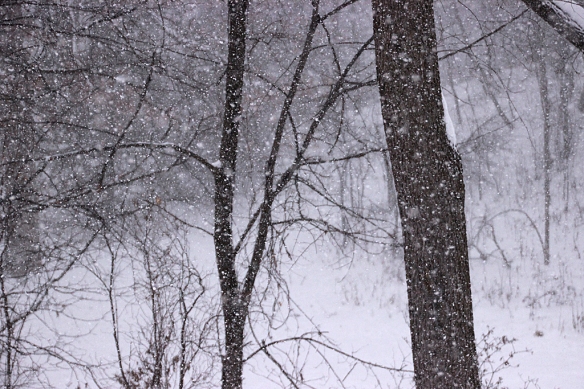 the prey…red squirrel sitting in a tree 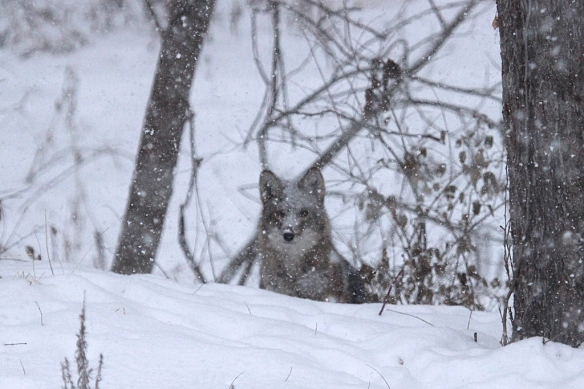 the predator…waiting for a chance to surprise

the look…sees something (squirrel?) he might have a chance to catch

the end…nothing for him here today

Even a blanket of snow doesn’t hide the outline of a coyote as it stalks its prey.

It’s back!  The wandering coyote returns after a one-week hiatus.

Walking the same trail the fox and the neighbor’s dog patrol.

And in broad daylight, so not being very secretive about its visit.  This coyote seems to be a loner, which probably means it is a non-territorial nomad cruising a large home range.

I assume it follows the scent trail of the other canids in the area, checking out who’s who in the territory.

Coyotes tend to occur either as transient loners or in small packs that take up residence in an area.  Single individuals are either youngsters who have been pushed out of a pack because of competition with the breeding pair or old individuals  pushed out by the young studs.  But whereas packs tend to be active at night or in early morning or evening, single individuals are often active in the daytime — another clue that this one is on its own. 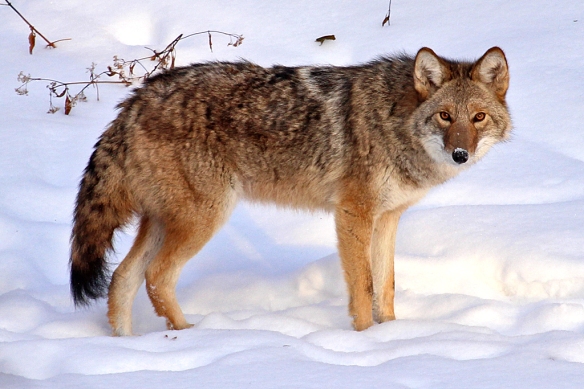 It sees me after I open my porch window to get a better shot, but that doesn’t scare it away.

One last action before moving on to explore the next backyard — marking the trail with its own scent.

Is this male or female urination behavior?

Male coyotes mark with urine scent more often than females, using either the raised leg or “forward-lean” posture.  Female coyotes use the same squat posture that female dogs do, so this must be a male.  The fact that he takes the time to scent-mark this trail may mean this neighborhood is part of his nomadic territory.

But this is what happens next.

Good job, Riley. The neighbors’ retriever goes right to the site the coyote marked just a few minutes earlier and covers it with her own scent.

While I love seeing all the wildlife that comes to the backyard, I am not particularly excited to see this one visit.

The coyote paused momentarily before heading up the hill toward the fox den.

The coyote was two backyards away before we spotted him, so the photos are less than wonderful.  I’ve seen them wandering the backyard previously and so have some of my neighbors, so this one may have taken up a loose residence here.  That’s not good for the red foxes, with whom they not only compete for food, but will attack and kill.  For all I know, the coyote may have discovered the red fox den two backyards away and taken it over.  Too bad, I was hoping for more photos of the foxes and their family this spring.

On the other hand, with coyotes around, the mouse and rabbit population will be kept to low levels, which is good for the garden next year.

Nose to the ground looking for…mice? fox scent? other coyotes?

These highly adaptable predators are found in a variety of habitats, eat a variety of foods, mate with a variety of other canids (other dog breeds and wolves), and survive a great variety of challenges, so it’s no wonder we eventually see them in our backyards.  I remember seeing a pack of them running through the hills in urban Los Angeles.  Most often they hunt in pairs, but can form packs like wolves, roaming a huge territory, as much as 20 km around their den.

In the past year, I’ve heard or seen bobcats, red fox, and now coyote in my suburban backyard; what’s next — will the timber wolf eventually make its way to the Twin Cities?