Male Brown-headed Cowbirds have been engaging in courtship display in the backyard this week.  Interestingly, they seem to display to each other in order to entice females closer.  This is sort of like the multiple male displays one sees at a grouse or prairie chicken lek (see my earlier post on this), and serves a dual purpose of stimulating males to perform, while giving females a chance to compare their performances and choose the “best” male to fertilize her eggs.

The sequence of alternating displays begins with first one bird and then the other puffing up, spreading wing and tail feathers and bowing to the other bird while emitting a blackbird-ish, high-pitched call note. 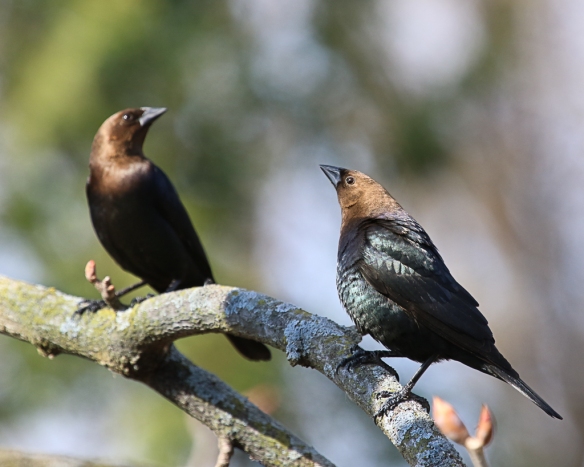 Bird on the right begins the sequence… 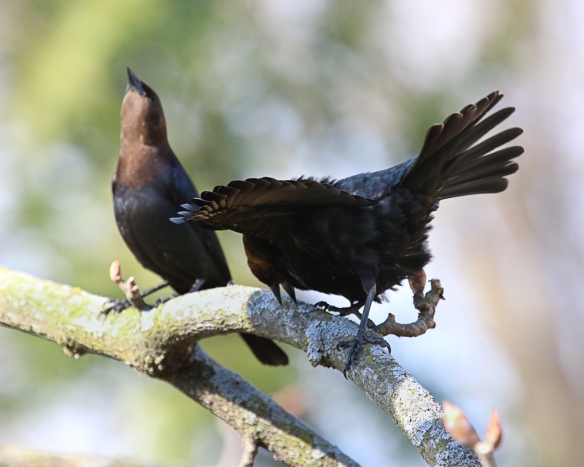 Back to neutral, bill up position… 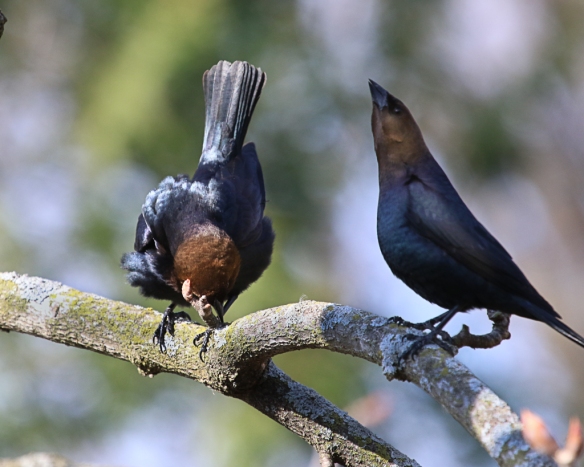 Another male pops in between the two displaying males — will this exhibition be a trio?

I’m not sure if this is a threat display by the left-most male, but it doesn’t continue with the bow, and the middle bird took off quickly.  (Females are grayish, with some faint striping on the breast feathers.)

Leaving the two original males to continue their dance…

There is a lot of racket in the backyard these days — cowbird chicks have fledged and are once again driving their Chipping Sparrow parents crazy with their persistent chirping demands to be fed.  I have recently written about the Cowbird’s “Mafia strategy” for getting other species to raise its chicks (you can click here to (re)read that post).  The unfortunate Chipping Sparrows seem to be regular hosts for the Cowbirds in my backyard.  This is the third year I have seen the diminutive little sparrows foraging intensely to satisfy the appetite of chicks that are twice their size.

Cowbird chick waiting patiently (?) for its foster parent to return with something good to eat.

Doing a little preening while waiting. 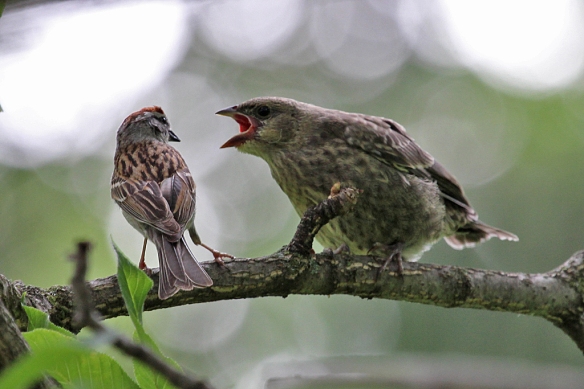 Then a foster parent arrives and the cowbird chick goes into a frenzy, fluttering its wings and tail, chirping loudly. The Chipping Sparrow looks a little intimidated, doesn’t it?

And back the parent goes to find something else for this voracious eater it has mistakenly raised.  Chipping Sparrows feed their own young, as well as their foster kids, insects, even though they themselves eat a varied diet of seeds, fruit, and insects during the summer.  As I watched these host-brood parasite interactions, I saw the adults spend a lot of time hunting damselflies, flies, bees, etc. in the grass around the base of the buckeye tree in which this big baby was sitting.

On this trip, it looks like the sparrow nabbed a damselfly, judging from the long, slender abdomen and wings sticking out of its beak.

No problem fitting that tiny little damselfly in the chick’s great big maw.

Even though the chick was getting fed by both parents, it just kept screeching for more.

The Chipping Sparrows didn’t spend all of their energy feeding the cowbird chick — I could hear them feeding a couple of their own babies that were hiding in the shrubs on the side of the yard.

There is no doubt about it — Cowbirds exhibit ingenious methods of manipulating other bird species into raising their little brown-headed offspring.   Cowbird eggs have been found in the nests of 220 bird species, ranging in size from hummingbirds to raptors. 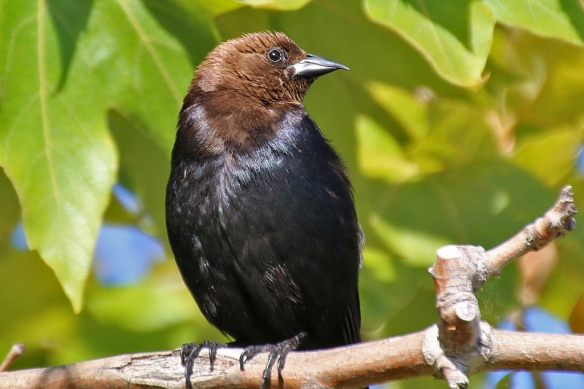 By watching the nesting activities of particular target bird species, Brown-headed Cowbirds time their reproduction with that of their host, forcing the host to raise their chick for them.  A single female, laying just one egg in a host nest, may produce up to 36 eggs in a breeding season.

Cowbird chicks are usually larger than the host species chicks, hatch a little earlier, and grow a little faster, so they may consume the bulk of the food that parents bring to the nest, to the detriment of the host’s own chicks.

The end result is a single large Cowbird chick that follows its host parent (in this case, a Chipping Sparrow) around incessantly begging for food.

Some species, such as Robins, Gray Catbirds, and Brown Thrashers, physically eject cowbird eggs from their nest and seem less susceptible to nest parasitism. Blue-gray Gnatchatchers desert their nest if they find cowbird eggs in it and Yellow Warblers simply build another nest on top of the one that was parasitized, hoping the cowbirds don’t find them again.

However, Cowbirds have learned to retaliate against some egg rejectors with “mafia-like” behavior.

Ever watchful, Cowbirds not only monitor the nesting activity of the host, but watch what becomes of their eggs in the host nest.  If the host rejects the foreign egg, cowbirds return to the nest and destroy the host eggs!

And the “mafia” behavior works.  Prothonotary Warblers that rejected cowbird eggs managed to raise only one chick because cowbirds punctured the other eggs or threw the host’s offspring out of the nest,  Those that tolerated the presence of a cowbird chick in their nest raised three of their own chicks.  So, it pays to be tolerant of a nest parasite if you’re a Prothonotary Warbler.

Cowbirds have even learned to “farm” their host species by manipulating the hatch time of host eggs to match their own chick’s hatch time.  This is achieved simply by destroying those host eggs in the nest laid earlier than their own.

Who knew that becoming an accomplished nest parasite required such intelligence?