Just as I was about to leave the one of the parks on the Mississippi River that I visited today, I heard bluebirds singing in a nearby tree, so I tried to track them down.  They never let me get close, but the contrast of the males’ bright blue feathers against the rusty brown of old oak leaves was striking enough to make some nice photos. 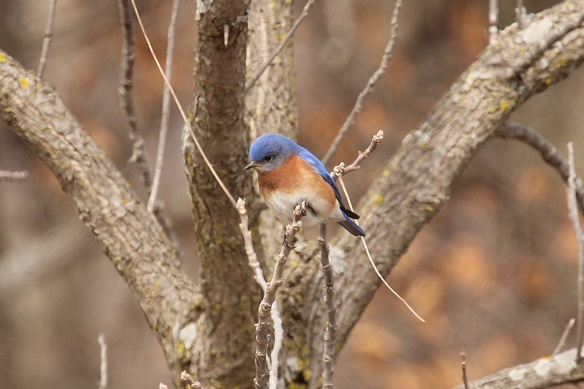 The bright blue really makes this bird stand out, but the rusty brown breast feathers just matched the color of the oak leaves. 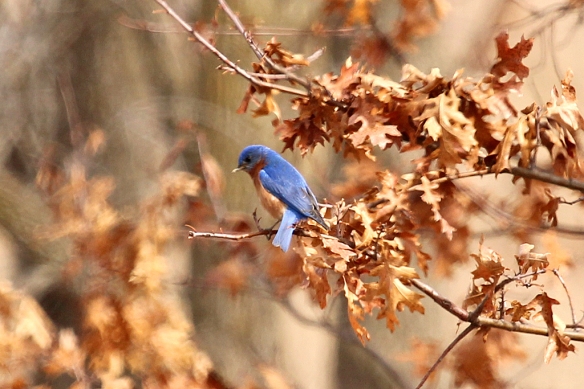 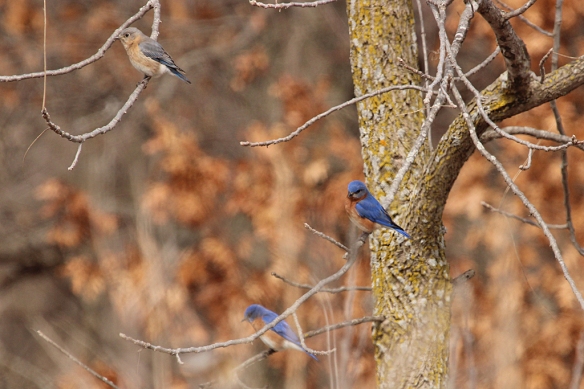 Some males seem to be much bluer than others, and the females (upper left) have paler rusty breast feathers and much less blue in their wing and tail feathers.

My long-term blog readers may recall from earlier posts that the blue color is structural, rather than the result of a pigment.  Tiny air spaces in the feathers contain particles (like dust) that scatter and reflect short wavelengths of light so that the feathers appear blue to our eyes.  In the wrong light (i.e., indirect), the bright blue feathers just look slate gray. 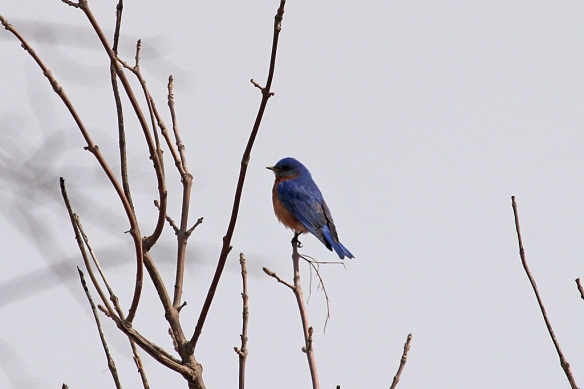 A poorly lit subject without direct sunlight on his blue back looks a little less blue.

Bluebirds are not very cold tolerant birds, and we may still experience more spring snowstorms and sub-freezing temperatures, so I hope these guys haven’t arrived too early.

Spring is in many respects a celebration of color, as plants and animals emerge from a very blah-colored winter dormancy.  We have been barraged by a profusion of pinks, reds, oranges, yellows, golds, browns, chestnuts in the past couple of weeks as the spring migrants have passed through here.  These bright colors are all products of pigments synthesized or ingested and metabolized by their exhibitors.  You’ll notice I left some colors out.

The blues:  Blue color in animals is produced by structural reflections of incoming light, not a pigment.  As a result, the true coloration on an animal often changes as their position changes relative to the observer.

Here’s how it works.  The underlying color of a blue bird is black (or brown) and is produced by melanin pigment.  Feathers that appear blue have air spaces in their pigment-containing cells that reflect short wavelengths (blue light) but transmit longer wavelengths.  Thus red and yellow (longer) light wavelengths are absorbed by the melanin pigment and blue light is amplified and reflected back to the observer’s eye.  The structural organization of the air spaces determines the intensity and hue of the “blue-ness”. 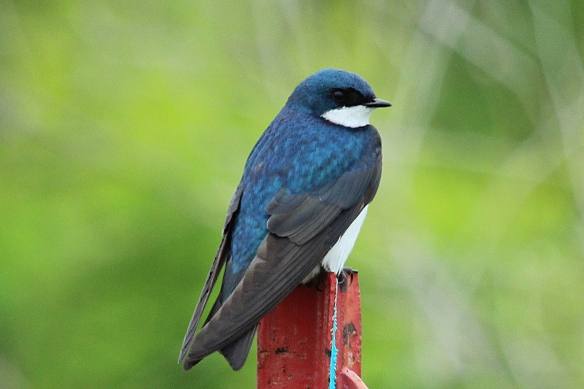 This Tree Swallow looks bluer than the previous one. The bird might be older (first year birds are often more brown), or the incoming light might be oriented differently in the two birds. 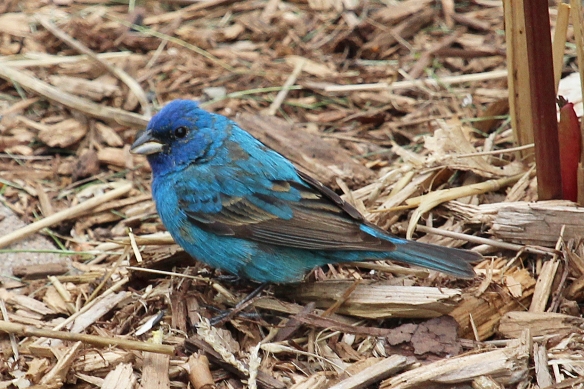 Blue color ranges from cobalt on the head to turquoise on the belly feathers in this Indigo Bunting. The primary wing feathers lack those light reflecting air spaces and show the underlying brown/black melanin pigment.  Modification of internal structure might weaken the feather, making it unsuitable for flight.

A similar process of light scattering and absorption explains blue colors in insects, like dragonflies.  In some species, the outer cuticle is transparent, and the scattering of blue light and absorption of longer wavelengths occurs in the layer just beneath the cuticle.  This is the basis for the blue color of the male Eastern Pondhawk. 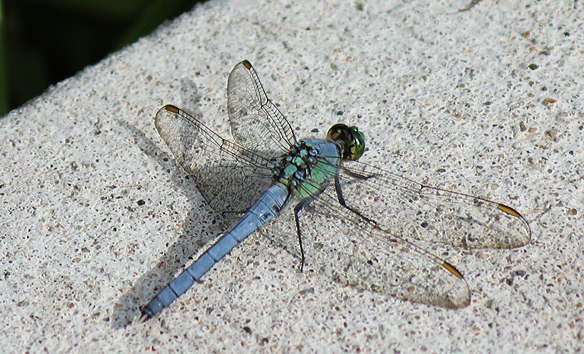 In other species, the light scattering occurs in a waxy layer above the cuticle, and can be removed by dissolving the wax.  The animal then becomes the color of the underlying pigment.

There is no doubt that blue coloration is striking and noticeable in animals, and it seems to be used to call attention to some aspects of the animal’s anatomy.  What could be more striking than seeing an animal advertise this? 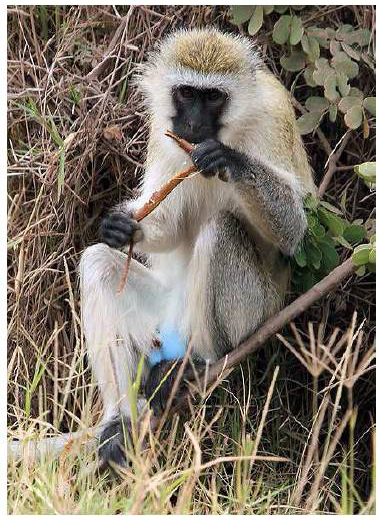 We stopped for a snack while on our walk on the Rainbow Trail along Taylor Creek. A Stellar’s Jay discovered us and stopped to see if we would leave something for him. 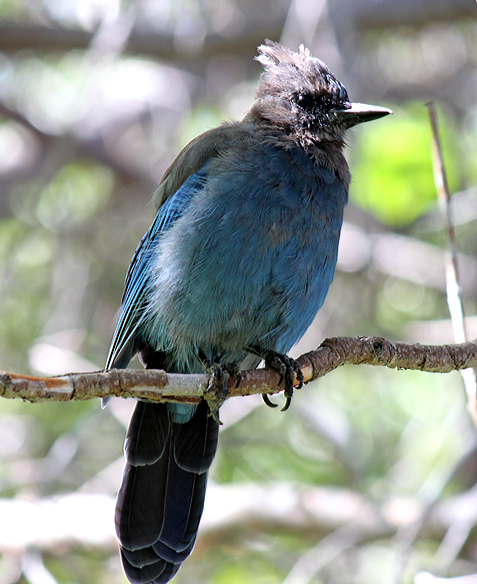 They normally eat a varied diet of insects, seeds, nuts, and berries.  They are unpopular for their nest thievery, because they will take eggs out of unattended nests and even grab unprotected nestlings as a snack.  But today this one was interested in our peanuts. 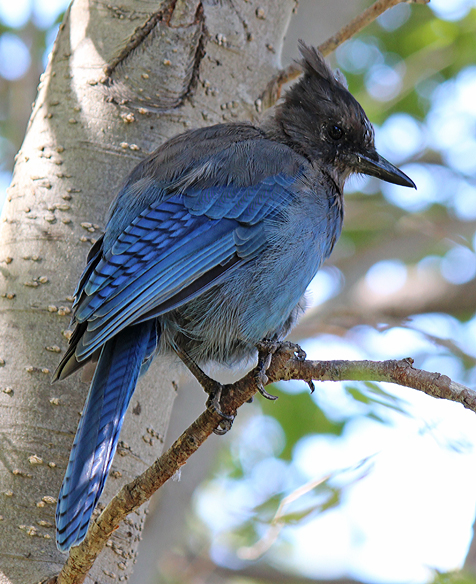 This is an entirely western species, and in fact, replaces the eastern Blue Jay in about the middle of the Rocky Mountains.  Their range stretches from northern British Columbia along the western one-third of North America as far as Panama, but they are usually found at elevation in coniferous forest. 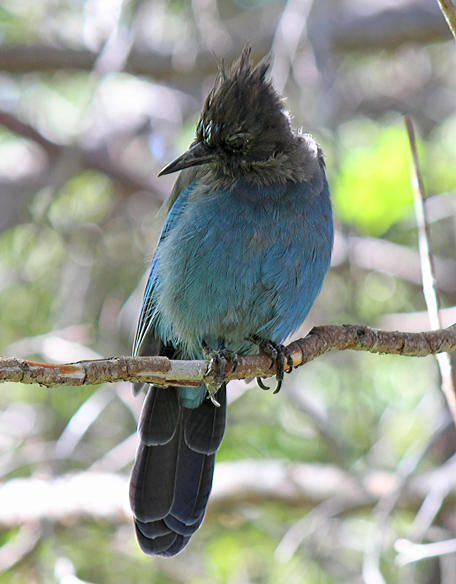 I love their bright blue color, which as you recall from an earlier post, is created by the light reflection within the feather structure, not by a pigment.