Sunset light and still water make for scenic landscapes in the Alabama delta area. And a few ripples in the water add some interesting patterns to the scene.

I’ve rarely gotten so close to a Great Blue Heron, especially as it took off right in front of me. I think this might have been a juvenile heron, one a little less leery of human presence. There were three of them chasing each other around a settlement pond at Campbell Park in San Jose CA the other day, and the heron’s reflection in the shallow water seemed very artsy.

It’s pretty quiet in the backyard these days, and even the deer aren’t stopping by. But a walk in Reservoir Woods the other day produced some surprises, even if the wildlife weren’t cooperating.

Continuing on down the trail, I found a variety of forts had been built around some of the cottonwoods and oaks in the forest. Some were simple constructions that might fit one pre-teen sized kid inside…

But this next find was the real gem of my 4 mile stroll through Reservoir Woods.

Even with all the very bad experiences that 2020 brought us, there are also quite a few pleasant surprises. People who take time to decorate a lonely little fir tree and who bring a moment of joy to a walker with their humorous construction are just a few of the “benefits” of time away from our usual busy routine to think more creatively, to get out and enjoy the natural world, maybe leaving a little piece of ourselves to bring joy to others.

The sun came out this afternoon to give us a brief reprieve from the gray gloom that set in after the recent snow. I thought the new snow might look pretty in sunset colors, so I took a walk through the woods in the backyard.

Somehow, I changed the settings on my camera without trying, and took a few photos using the “watercolor” picture effect. This might be a nice start to a watercolor painting, if I knew how to do that.

Even on a foggy day with intermittent drizzle, Quebec City shows off its colors with beautiful fall foliage, its festive shops, fall harvest decorations, and incredible fresco artistry on the sides of public buildings.

View from the upper town of the port in Quebec City. The walk up a steep cliff and hillside was worth it.  Quebec city’s iconic landmark, the Hotel Frontenac, towers over the rest of the skyline.

View across the St. Lawrence seaway from Quebec City shows a lot of fall color in the trees.

Decorations on the doorsteps of shops in lower town, Quebec City 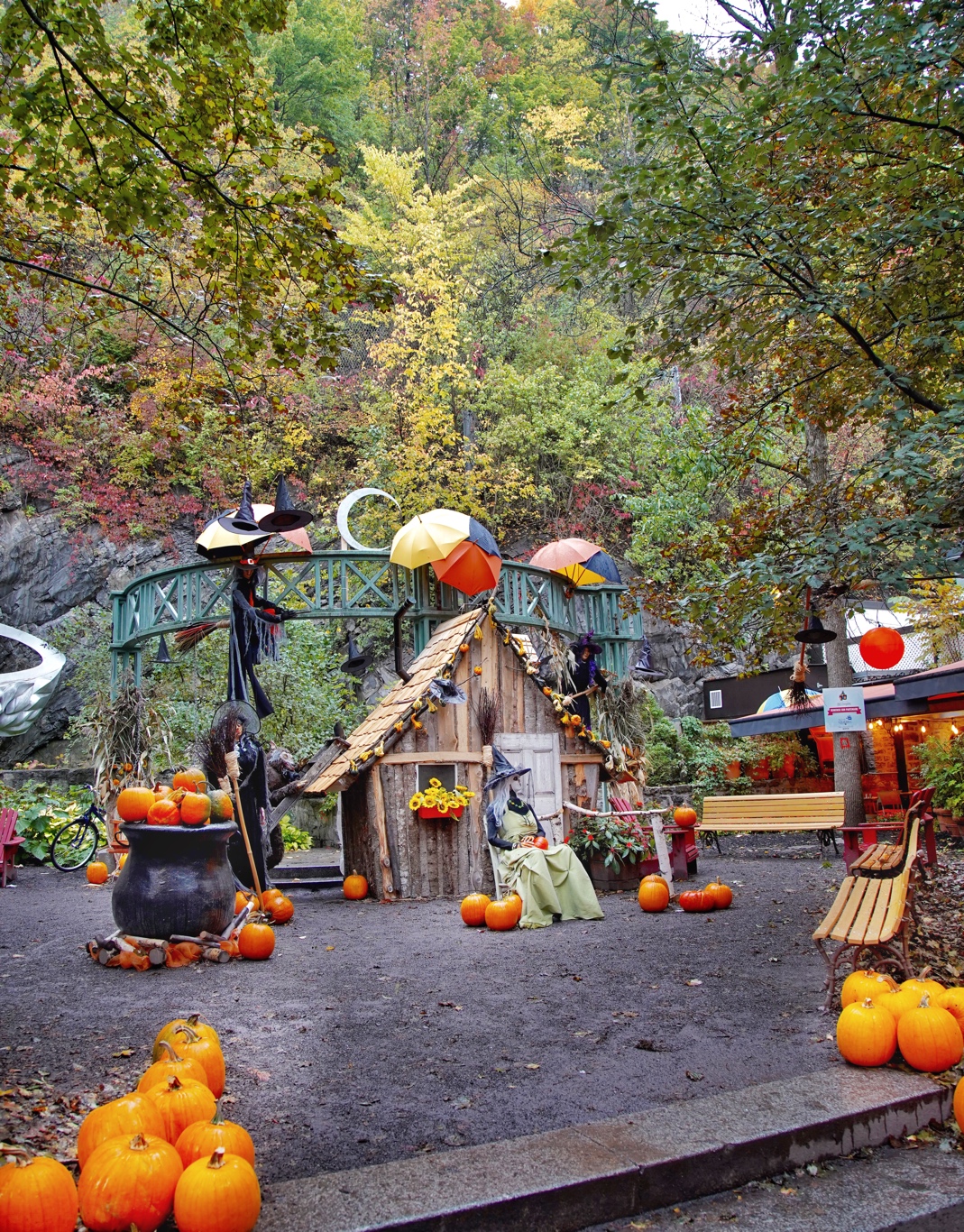 Halloween decorations in Quebec City were elaborate and found everywhere.

Hurluberlu = hullabaloo?  I’m not sure what these decorations in front of the Hotel D’Ville were for…

Frescos on the walls of buildings in Quebec City were incredibly life-like and tell a story.  You can’t tell where the building leaves off and the wall painting begins.

These frescoes have popped up just in the past 15 years and were commissioned to celebrate the 400th anniversary of the city’s founding by Samuel de Champlain.  Most depict some features of the city’s history and its notable landmarks.

On the road again, we stopped off in Wausau, Wisconsin to visit the Leigh Yawkey Woodson art museum and see their amazing exhibition of birds in art.  This place is definitely worth a weekend field trip, and in addition to all of the paintings, carvings, and sculptures to marvel at, there are classrooms and materials for creating your own bird art (primarily for kids).  A small sample of the pieces…

Outdoors, pieces are scattered around the extensive gardens.

15 foot tall Sandhill Cranes greet you by the parking lot.

A life-size sculpture of an ostrich

Turkeys in bronze.  I like the way the bronze yields the same iridescence that turkey feathers do.

Indoors, smaller sculptures and paintings draw you over for a closer look.

One of several rooms in the Leigh Yawkey Woodson art museum, Wausau, WI

Metal sculpture of a Kestrel. It’s minimalist in construction, but captures the most important characteristics of the bird that make it instantly recognizable. 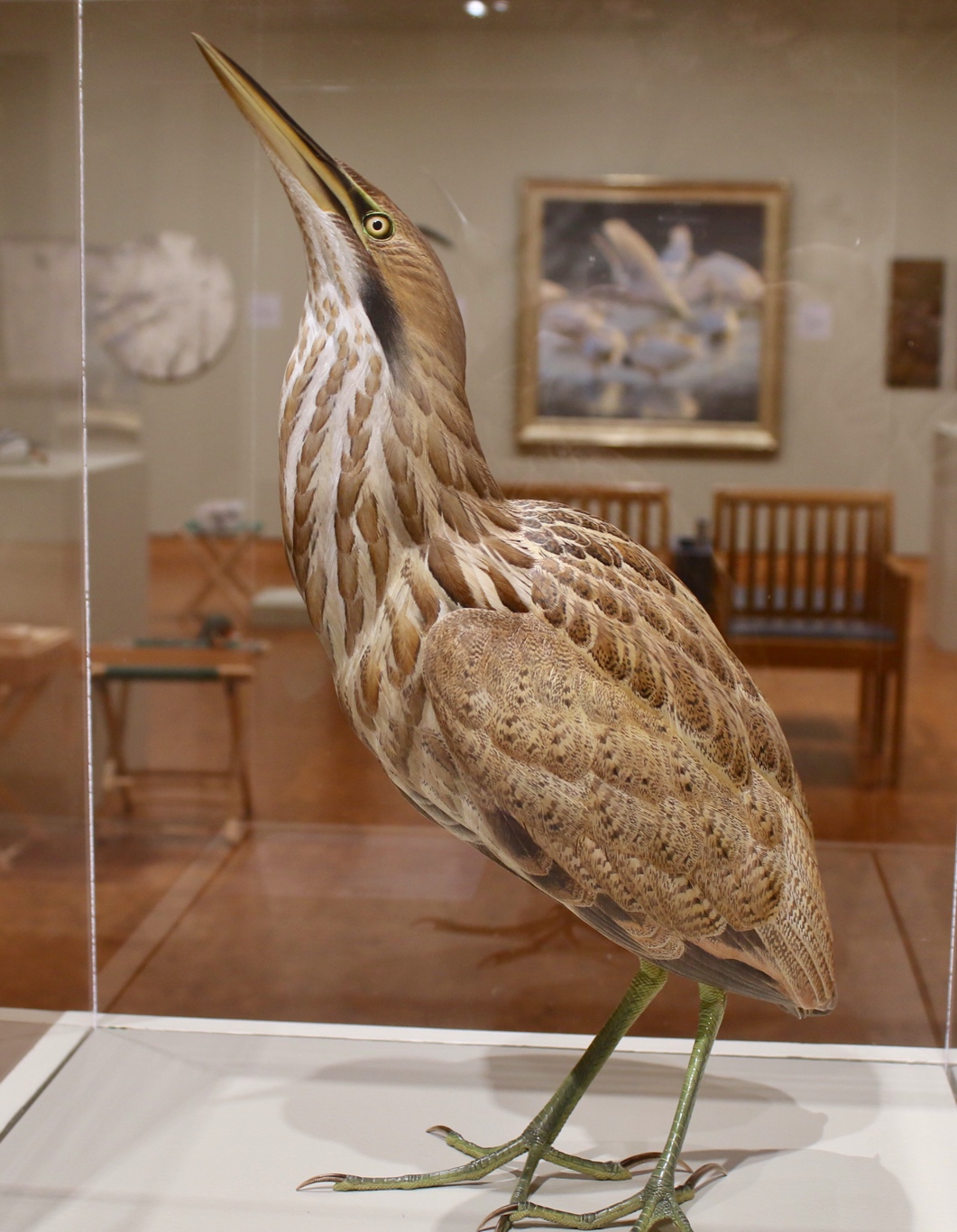 A Bittern carving in tupelo wood and painted with acrylic, and amazingly life-like.

The photo doesn’t do justice to this amazing wood sculpture of two skuas chasing a tern. There are no external supports for the free-flying forms, and the wings only touch in one small area. Instead the support is internal within the sculpture somehow.

Church of spilt blood, St. Petersburg , what a contrast after looking at city dwellers residences.  The interior is covered with thousands of square feet of mosaics depicting the life of Christ.

Canals in St Petersburg connect the dozens of islands that make up the city. 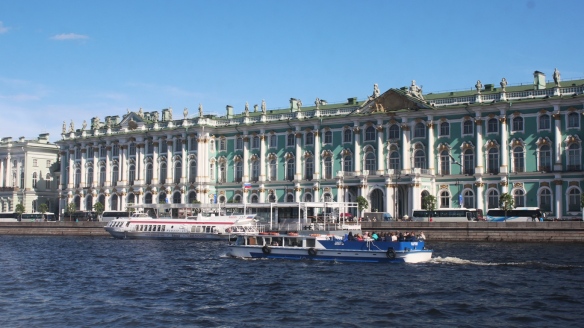 The Winter Palace, St. Petersburg is one of four museums of art and antiquities that make up the Hermitage. Only 20% of the more than 3million acquisitions are displayed at any one time. 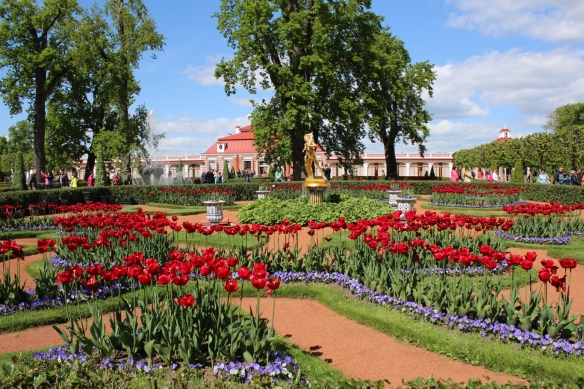 Gardens at Peterhof, St. Petersburg. Summer residence of Peter the Great, on the Gulf of Finland

Catherine’s Palace, St. Petersburg, ornate and lavish with its own set of art treasures 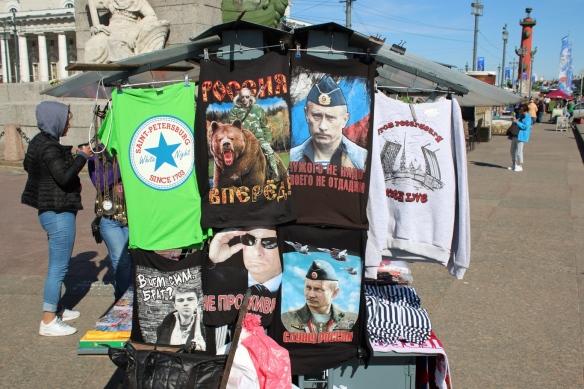 Yellowstone national park has the highest concentration of thermal features anywhere in the world, but it is far from a sterile place as far as living organisms are concerned — even in the hottest of the hot springs, “life has found a way”.

Bands of color in the hot pools reflect the types of microorganisms that live there. Clear blue or bluish green water in the center of the pool bubbles up just below boiling temperature, but cools rapidly toward the periphery, allowing various bacteria to colonize.

Two groups of microorganisms (Archaea and Bacteria) are the foundation of Yellowstone’s thermal ecosystems.  By utilizing the chemical elements liberated by steam and boiling water from the rocky matrix, they build vast and deep mats of bacteria that encircle the hot pools, different species existing in different thermal gradients from just below boiling temperature to simply “hot” water.

Types of organisms found in the thermal strata around a hot pool can often be identified by the colors they produce.

Clear blue water with steam and bubbles arising from the surface indicates this pool is probably too hot to support life. 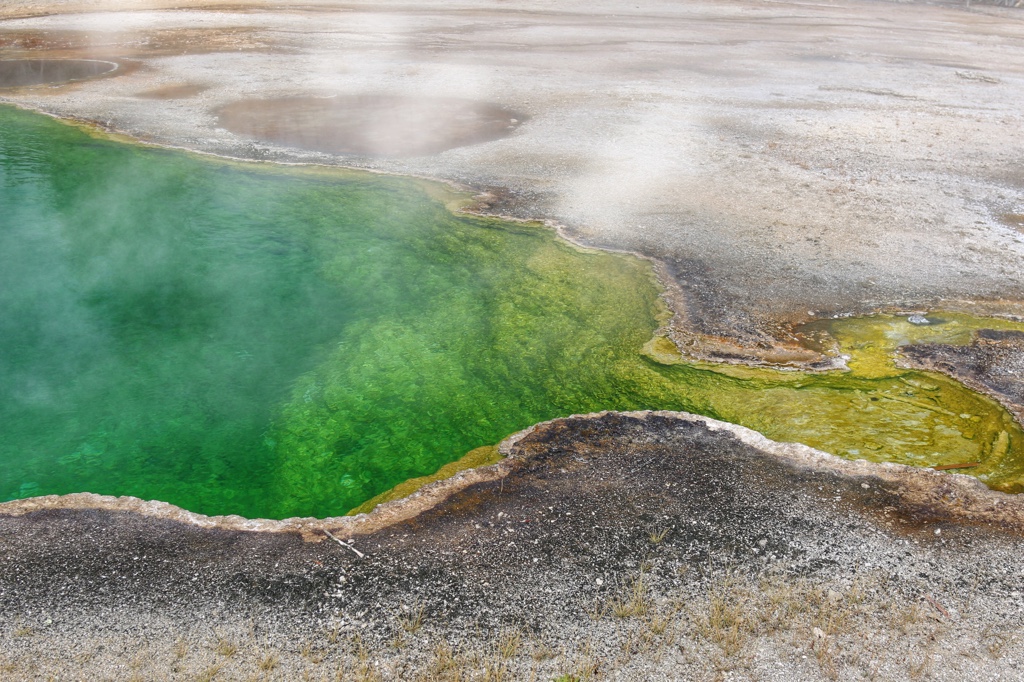 Blue-green (cyano)bacteria are some of the most heat tolerant organisms. The color of the water in the pool is actually a blend of blue reflected light that normally occurs in clear water and the yellow light reflected by the carotenoids pigments of the blue-green bacteria.  Higher concentrations of the bacteria are growing next to the pool, giving it a more yellow color.

This is a much cooler pool, indicated by an orange ring of thermophilic bacteria surrounding organisms that reflect dark green to brown colored light. According to the chart above, we might expect organisms like algae, Protozoa, and fungi, rather than just bacteria here.

Ephydrid flies specialize on eating the bacterial and algal mats in the hot pools, although they too (especially their eggs) must be heat tolerant.  These consumers in turn attract a variety of predators, like spiders and dragonflies, who must be mobile to escape sudden spurts of boiling water.

Half a dozen dragonflies met their demise at the edge of one hot pool. Perhaps wind blew them into the hot water.  The substrate here is not sand or rock, but clumps of bacteria that have formed small columnar structures. 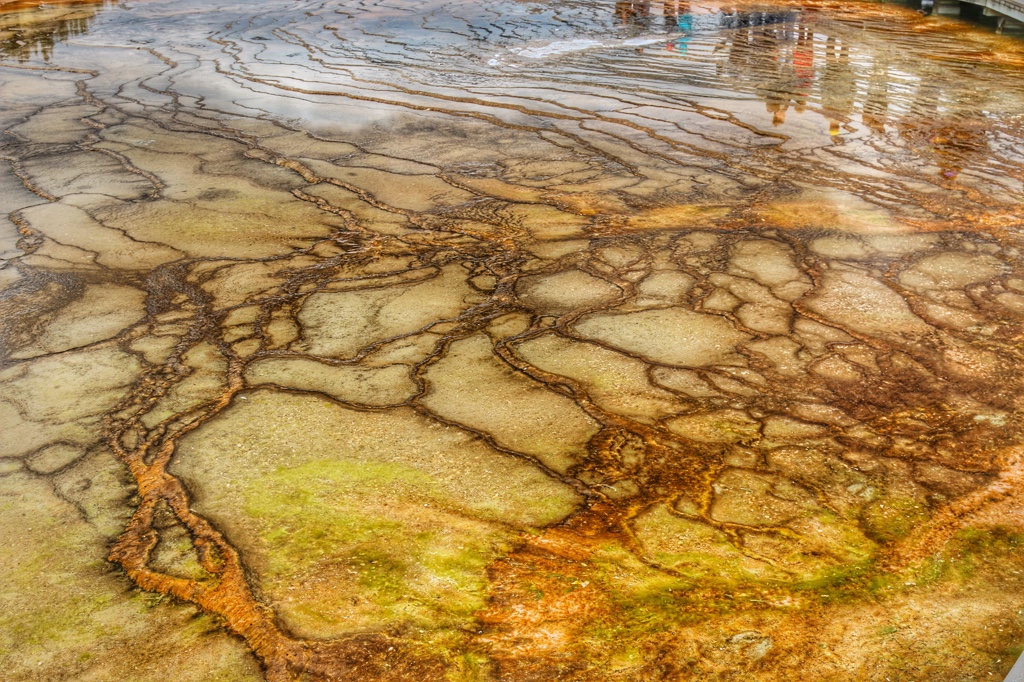 Sometimes the patterns formed by bacterial growth take on the form of familiar (to me at least) structures. This looks just like a huge capillary network, branching off an arteriole on the left.

Or how about this one — what do you see in this accumulation of bacterial growth at the edge of the hot water?

I’ve been trying out a new, quick photo editing program on the iPad, Snapseed.   It’s a real time saver, compared to my usual method of editing images in Lightroom.  It’s easy to get carried away with special effects, though, with these landscapes from the geyser basin at Old Faithful in Yellowstone National Park. 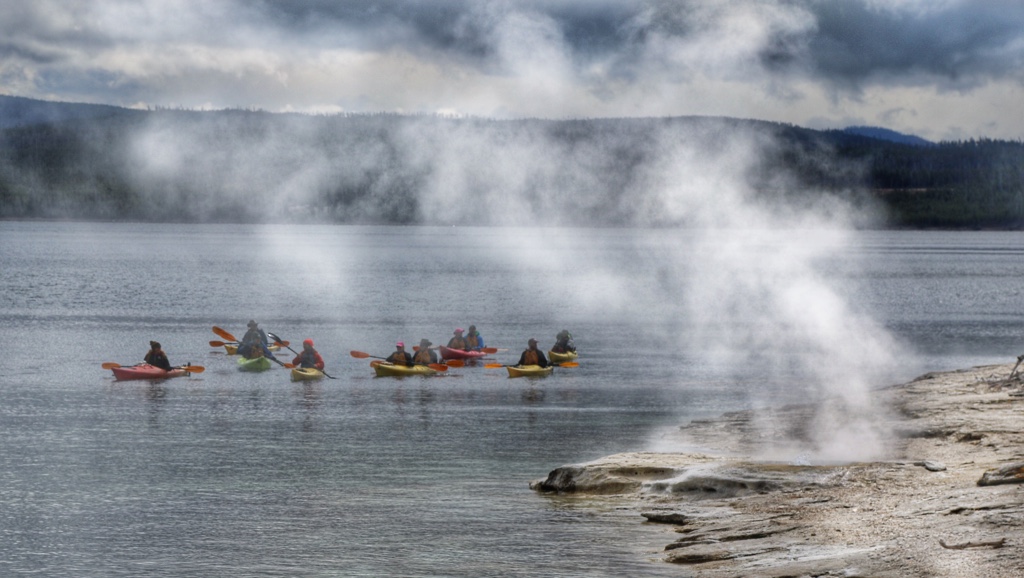 Crowds turn out for Old Faithful’s eruption about every 90 minutes.

At peak eruption, Old Faithful shoots steam and water about 100 feet into the air.

I don’t know how often bison fall through the thin crust of the geyser basin, but they must enjoy the warm steam baths.

Mirror reflections of the landscape show on the surface of the hot pools in Old Faithful geyser basin.

Ansel Adams introduced us to the grandeur of Yosemite and the Sierra Nevada mountains in his early photography in the 1920s and 30s, but his famous capture of the light on the Grand Tetons and Snake River was made about the time he invented the 10-point zone system of tonal contrast (varying from pure white to pure black) in the early 1940s.

The winding path of the Snake River draws one’s eyes right to the dramatic peaks that stand out so starkly and definitively in black and white.  Adams added some additional contrast to the sky to bring out the drama of the clouds and weather in this location.

It’s hard to reproduce that scene today, because the vegetation has changed quite a bit — in fact, the trees have grown so much they obscure part of the view of the river.

Our view was marred by smoke from the Yellowstone fire, as well as low fog and haze.  The hill on the left lined with evergreens still dips toward the river, and the river’s path is about the same, although not obvious through the trees.

On another day (with better air clarity), we got a good sense of the rugged texture of those famous peaks, punctuated with a little fall color from the yellow aspens. 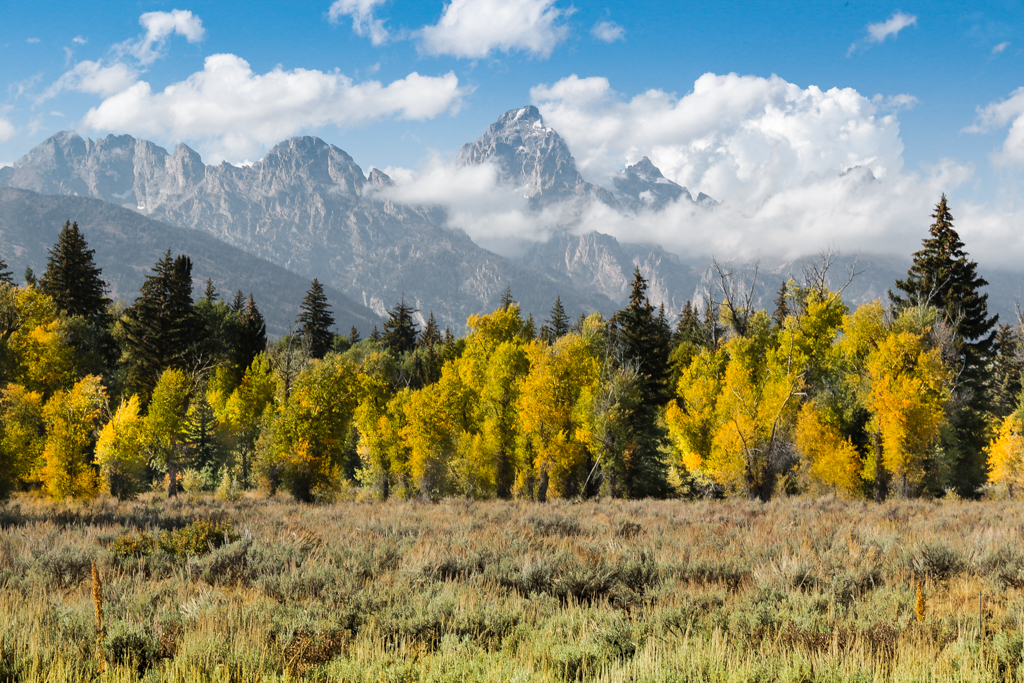 The clouds constantly drifted by the peaks, uncovering various new aspects of them over time.

This was going to be a 5 minute photo stop for the group of photographers in this Rick Sammon workshop, but turned into an hour long session, as the clouds drifted over the peaks presenting amazing new views.

This location provided an opportunity to try to “channel Ansel Adams”, for some dramatic Black and White photography.  So, here’s my rendition of the Grand Tetons a la Ansel Adams.

What a location for landscape photography, to say nothing of the wildlife we saw as well.