On a walk on a dreary, rainy day at Tamarack nature center the other day, armed with only a cell phone camera (because who takes photos in the rain, right?), I came upon two flocks of turkeys.  Strangely enough, they were segregated by sex and separated by great distance, which I would never have expected at this time of year.  There were hens only in one flock of 14 birds on the south end of the nature center’s acreage, and toms only in the other flock of 7 birds on the extreme northern side, probably more than a mile away.  Hmmm.. shouldn’t they be feeling amorous at this time of year?

I came across this group while they were resting under some conifers. They immediately got up, paraded out in quick order, and disappeared into the forest undergrowth. 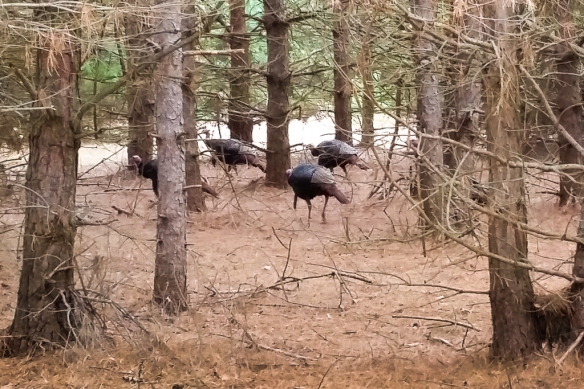 Some rather beefy looking Tom Turkeys were foraging under the pines, but never let me get within 100 feet, and always kept a good number of tree branches between them and me.

Turkeys can move rather silently and quickly through the vegetation, and if I hadn’t spotted a glimmer of something dark moving, I would have missed this group altogether. It doesn’t look like it, but it was quite dark under these pines on a dreary day.

I suspect if I had taken the camera with the big heavy telephoto I wouldn’t have seen any of this.  Sometimes, it’s just as nice to have a good visual memory (instead of a digital one) of a unique experience (at least that’s what I’m trying to convince myself of).